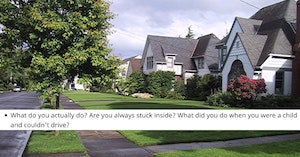 Slovakian Has Questions About US Suburbs After Seeing Video—’What Do You Actually Do?’

A Twitter post is blowing up for featuring some questions that a Slovakian individual had after apparently watching a video about suburbs in the U.S. which once again reveal that this country is a weird place that doesn’t operate quite like any other nation. Or as urban planner Tristan Cleveland put it: “The level of bafflement is hilarious and appropriate.”

“What do you actually do?” the Slovakian user asked on Reddit. “Are you always stuck inside? What did you do when you were a child and couldn’t drive?”

Many of these questions reflect the fact that many areas of the U.S. have become so dependent on cars that you can hardly live a life without one. Suburbs are built with the assumption that homeowners will have at least one car per household, and public transportation is often entirely inaccessible or so inadequate that it can take hours just to get to any store by bus. It’s so bad that the individual from Slovakia thought public transit just doesn’t exist in the U.S. suburbs.

“Why is there no public transport?” the Redditor asked. “It seems like the only thing is the yellow school bus, idk.”

At the same time, many suburban neighborhoods have laws that bar people from opening shops or bars or anything fun within the area, because the assumption is that everyone will just drive to these places. And yes, a large part of this is due to “lobbying from car or oil companies,” as the Redditor inquired. It’s both, in fact.

They also questioned the prevalence of “single-family housing” laws that forbid developers from building anything except houses in which one family will live, which is part of the reason why there aren’t enough apartments or other types of housing to go around. That’s why rent is skyrocketing, squeezing the millions of us who can’t afford to buy a house even when the market isn’t going absolutely buckwild.

“Why can’t you have idk a commie block in the middle of such a suburb? Or row houses or whatever.”

The answer to this is that the people with the houses and their projected ideal of the 1950s style utopian living (for white people) might be disturbed if they had to even look at someone who can’t afford to buy a house.

Lastly, this Redditor calls into question the common sight of empty back and front yards in U.S. suburbs, sometimes with a pool but mostly just open grass serving no purpose.

“Why don’t you grow plants in your yards?” they asked. “Like potatoes, cucumbers, tomatoes or whatever. Why do you own this land, if you never use it?”

The answer to that actually reaches back to European history. Wealthy landowners in England began to keep patches of empty land with nothing but manicured green grass as a status symbol around the 17th century, and the trend carried over to the U.S. where it somehow became a standard for middle class living. Keeping it empty, unused, and useless was the point — it was to show off that you had so much money you could afford to display patches of land that you didn’t need but owned anyway.

In the era of climate change, lawns are now largely an ecological nightmare, using up water we can’t afford to be throwing away on some grass that serves no purpose.

Naturally, the post highlighting these questions has inspired some interesting discussions in the comments, with some defending U.S. suburban life and others wondering how difficult it would be to move to Slovakia. Other Europeans have expressed dissatisfaction with some of the answers Americans have offered.