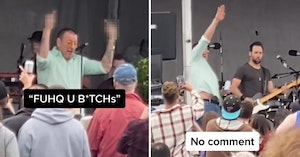 Apparently fresh on the mend from some heart issues that led to Smash Mouth lead singer Steve Harwell taking a hiatus from the band, he was spotted in a TikTok video giving a terrible concert, during which he appeared to give the Nazi salute at least twice. This was just one moment of a concert highlighted by TikTok user Haley, who went to the show in spite of the “ethics” not being “great” and made a video showcasing “the most chaotic show I’ve ever seen in my entire life.”

Indeed, Harwell can be seen openly drinking during his concert at a local beer and wine festival, slurring his speech to the point of being barely comprehensible, dropping his beer while nodding off standing up, and seeming entirely unaware of the constant sound problems plaguing the band.

During this less-than-all-star performance, Harwell repeatedly mumbles into the microphone, seeming to be at times cussing out and issuing death threats to either a mystery individual, the entire crowd, or anywhere in between.

“F— you b—hes,” he says at one point while giving the crowd the double bird.

“I’ll f—ing kill your whole family, I swear to God,” he mentions later, quickly followed up by: “If I could suck my own d–k I’d never leave the house.”

At one point he seems to declare that he and the band (or he and someone, at least) are “going to Greece.”

Smash Mouth’s general reputation tanked among certain sections of the population after Harwell decided to play at the infamous Sturgis Motorcycle Rally in South Dakota in the summer of 2020 — an event that was predicted to be a super-spreader and absolutely lived up to the prophecy. The lead singer got on stage during that fateful August and yelled “f— that COVID s–t” and proceeded to play for a crowd that would go on to cart their infected corpses all across the U.S. on their ugly bikes.

Though Harwell was widely dismissed as an irresponsible privileged douchebag who has too much money and net zero knowledge at best, viewers of the TikTok video couldn’t help but notice that part where it really looks like he’s giving a Nazi salute, prompting Haley to post a follow-up video showing that he did it at least twice.

While Harwell might not have intended to give the Nazi salute, you can forgive people including Haley, multiple commenters, and the guy in the video who turns around and mouths “did you see that” to someone for being a little on edge about the subject. Some commenters have claimed that this is not the Nazi salute because he didn’t quite do it right, but to be fair, has Harwell ever done anything right since he partnered with the Shrek franchise?

“There is always work at the post office,” said one TikTok commenter. “The rest of the band needs to quit.”