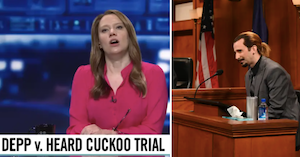 The defamation trial taking place between Johnny Depp and Amber Heard continues to be made fun of in popular culture. While it’s clear that the trial is very disturbing, people still feel it’s necessary to mock domestic violence — and now Saturday Night Live has joined the chorus with their sketch over the weekend.

In the comedy sketch series’ cold open, the show made fun of the trial, in particular an incident in which Heard allegedly defecated on Depp’s bed.

When Bryant’s character asked Mooney’s Depp what his reaction was to discovering “fecal matter in your bed,” Heard’s main lawyer Elaine Bredehoft, played by Heidi Gardner, objected. The judge in the skit allowed the questioning to continue, saying that “It does sound fun, and this trial is for fun.”

Except the trial is not for fun — and the fact that people keep mocking a really serious situation is definitely disturbing.

“Okay, I think I’ve seen enough. This trial has given me a lot to consider,” the judge continued. “On one hand, I believe Mr. Depp’s story, but on the other hand, you’re constant smirk lets me know this is not the first woman you made so mad that she pooped in your bed.”

Back in 2018 Depp sued Heard for defamation over an op-ed she wrote for the Washington Post where she claimed she was a “public figure representing domestic abuse.” At no point in the article did Heard every name Depp specifically — but Depp’s lawyers said she indirectly labeled him an abuser and ruined his career. The $50 million defamation lawsuit was filed in 2019 in Virginia, with Depp saying Heard’s allegations are false.

Heard filed a $100 million defamation counterclaim of her own. Now, that trial is being broadcast live across the world — to people who can’t seem to comprehend the severity of the situation, including SNL.

Some Twitter users found the entire thing to be in poor taste and totally unfunny.

The meme-ification of the trial has been criticized, with folks saying this is actively harming survivors of domestic violence and anyone who is contemplating coming forward with their story of abuse.