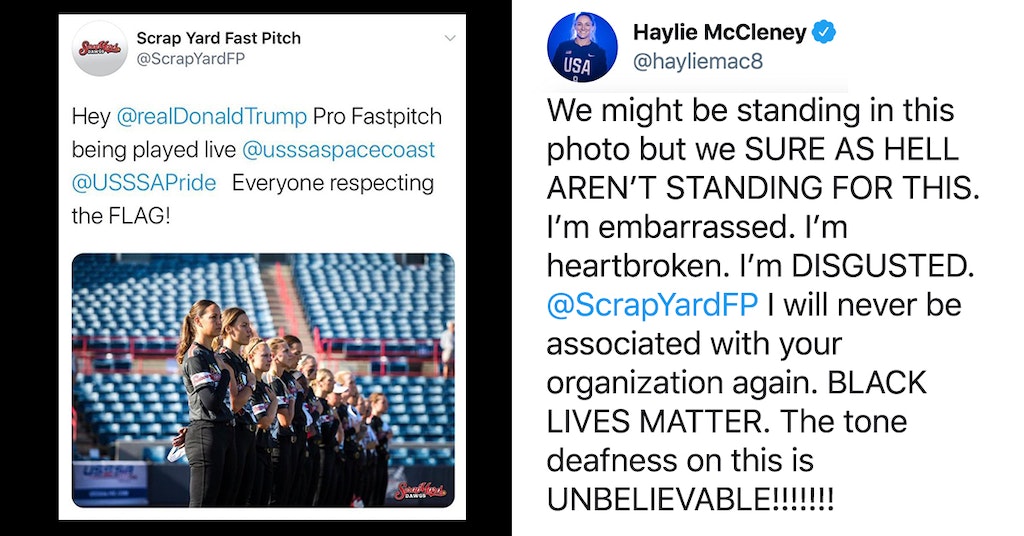 After playing a game last week, members of a Texas-based softball team returned to the locker room only to discover the team’s general manager had used a photo of them standing for the national anthem to seemingly push back against the Black Lives Matter movement.

And in response, every single member of the team quit.

Scrap Yard Fast Pitch faced off against The USSSA Pride in the first of what was a planned seven-game series last Monday night. When they returned to the locker room, members of the team reported that a teammate who didn’t play at the game, Kelsey Stewart, had texted them a screenshot of a tweet sent from the team’s account written by general manager Connie May.

The debate between whether kneeling for the national anthem during sports events in protest of police violence and/or racial injustice is peaceful protest or disrespectful of a piece of cloth has been raging on ever since Colin Kaepernick first began kneeling at NFL games back in 2016.

But members of Scrap Yard FP were drawn into that debate without their consent, and were unified in their horror over May’s insinuation that the team’s decision to stand was in defiance of others protesting.

According to The Undefeated, when the general manager was confronted about the tweet, she doubled down.

Apparently the tweet was quickly deleted after receiving backlash online, but damage had already been done and the team wanted an explanation.

However, May instead went on about being uncomfortable over the scrutiny she faced over the tweet, and reportedly even pulled an “All Lives Matter.”

It was at this point that the only Black player on the team who was in the room at the time, Kiki Stokes, walked out. And all of her teammates followed suit.

Other members of the team soon posted to social media to clarify their stance on everything.

The team they were slated to continue playing against also bowed out.

With six more games scheduled, the USSSA Pride presumably would have won by default without a team to play against, but instead initially opted to suspend their schedule to show support for Scrap Yard’s decision.

The new team, called This Is Us, “hopes to use a donation-based financial model to be able to play the bulk of what were originally scheduled to be more than 25 games against the USSSA Pride,” reports ESPN.

It’s unclear where the team will go from there, but what is clear is that, whatever they decide to do, nobody else will be speaking for them.