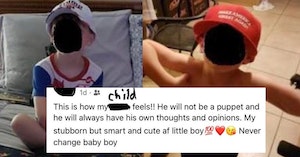 While a lot of Trump supporters seem to have the mentality of five-year-olds, actual children under the age of ten probably don’t have that many sincere political beliefs. Okay, maybe Trump supporters don’t either, but there’s still a difference. A Mom on Facebook is getting dragged for trying to say it was her son’s idea to dress up in Trump merch and pose for pics because he’s “not a puppet.” Everyone suspects she’s the puppeteer.

The screenshot of these photos was posted on r/insanepeoplefacebook, by u/autumnfrost-art under the title, “My son will not be a puppet!” *Proceeds to put Trump 2024 hat on 5 yo.*”

In the original post, where identifying details have been blacked out, the mom wrote, “This is how my [CHILD] feels!! He will not be a puppet and he will always have his own thoughts and opinions. My stubborn but smart and cute af little boy Never change baby boy.”

Yep, he is in no way being used as a prop to promote someone else’s agenda. A child definitely buys a whole lot of political merchandise of his own accord. The commenters pointed out how weird the whole post was, particularly noting the Trump bedspread this lady apparently sleeps under for some reason:

Parents, stop manipulating your own kids for a political agenda. They can’t even vote yet!