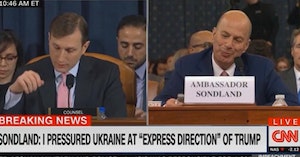 These Sondland Impeachment Hearing Memes Are Lighting Up Political Twitter

U.S. Ambassador to the European Union Gordon Sondland testified today at the public impeachment hearings and there is a surprising amount of consensus that his testimony was devastating to Donald Trump’s case. Even staunch conservatives have been saying that it’s all over for the embattled president, speculating that impeachment in all but inevitable at this point.

Some are even wondering if the Republican-controlled Senate will ask Trump to resign as they did with Richard Nixon, including former solicitor general for George H. W. Bush Ken Starr.

But what’s really got the internet’s attention is a photo of Sondland looking directly into the camera with what appears to be a bit of a sly look. It was initially predicted that the photo would become a meme, and in mere hours, that prediction was proven to be extremely accurate.

This pic of #Sondland will soon become a meme.#ImpeachmentHearing pic.twitter.com/2yJz2XOOBk

It’s not just the photo, however. Sondland’s testimony confirmed that “everyone was in the loop” on what was widely understood to be a quid pro quo between Donald Trump and Ukraine officials, implicating multiple current and former Trump allies such as Mike Pompeo, John Bolton, and Rudy Giuliani. A bombshell like that is worthy of memes of all flavors, and Twitter is lousy with them.

There are also Republican attempts to trip up the ambassador to note, as well as that photo of  Trump’s comically big notes insisting on his innocence.

Here are some of our favorite Sondland memes and jokes:

“Yup, that’s me. You’re probably wondering how I ended up in this situation.” pic.twitter.com/TE5yvMaUkQ

Me: I wonder if Sondland is gonna name names?

SCHIFF: Mr. Sondland would you like to implicate anyone in crimes

Sondland: "Everyone was in the loop. It was no secret."

just a devastating moment of testimony. no way he's coming back from this pic.twitter.com/OypntcD3hf

Me: “Grandma, you watching the #ImpeachmentHearing?”

Grandma: “Yea, baby! Ambassador Sondland may have to change his name to Lipton after spilling all this tea.”