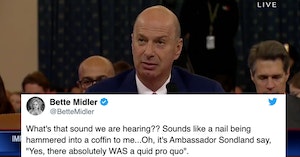 “Everyone Was In The Loop. It Was No Secret”—Sondland Acknowledges Ukraine Quid Pro Quo

Vice President Mike Pence has gone largely unmentioned during the impeachment hearings over Donald Trump’s alleged misdeeds. Though Trump has been accused of talking to every white man over the age of 40 with a government job about his plans to do crimes in Ukraine, Pence hasn’t really come up.

Then on Wednesday, EU Ambassador Gordon Sondland sounded the alarm against Pence—and many, many others—claiming he told the VP about the “quid pro quo” arrangement Trump was trying to set up.

What's that sound we are hearing?? Sounds like a nail being hammered into a coffin to me…Oh, it's Ambassador Sondland say, "Yes, there absolutely WAS a quid pro quo".

Sondland said that he warned Pence around September 1st that Trump was trying to get information on Joe and Hunter Biden from the Ukrainian president. Shortly after, Pence met Volodymyr Zelensky himself, Vice reports.

“I mentioned to Vice President Pence before the meetings with the Ukrainians that I had concerns that the delay in aid had become tied to the issue of investigations,” Sondland testified. “I recall mentioning that before the Zelensky meeting.”

This means Pence knew what Zelensky was referring to when he asked Pence why assistance funds were drying up. Sondland said Zelinsky asked about it directly, adding, “During the actual meeting, President Zelensky raised the issue of security assistance directly with Vice President Pence. The Vice President said he would speak to President Trump about it.”

Democratic Counsel Daniel Goldman tried to delve deeper into what Pence and Sondland discussed, to see if maybe Pence was confused about the issue.

“He didn’t say, Gordon, what are you talking about?” Goldman asked Sondland.

“He did not,” Sondland replied.

“He didn’t say, what investigations?”

“He did not,” Sondland confirmed.

After this meeting, Pence apparently said in a public statement that he asked Zelensky to do more to combat corruption. Unfortunately for Pence, Sondland’s testimony blows up the idea that this was a surprise thought he had in the meeting. It now reads as additional pressure from the Trump administration to investigate Joe Biden.

Who else wants to join Pence under the bus? A lot of people, or at least a lot of other people got dragged down by Sondland’s testimony.

This is E.U. Amb. Sondland's line for throwing everyone under the bus: "Again, everyone was in the loop."

As he explained that he couldn’t see “any credible” reason that assistance to Ukraine was still being withheld, he started emailing and talking to more people about the issue. The Hill reports that Sondland says he emailed Secretary of State Mike Pompeo to ask if the “logjam” could be resolved via a meeting between Trump and Zelensky. Pompeo replied yes, which means he knew about the situation as well.

Dunno how Giuliani, Pence and Pompeo are gonna get these tire marks outta their suits… Cause Sondland just threw each one of them bitches under the bus… #ImpeachmentHearing

“Everyone was in the loop. It was no secret. Everyone was informed view email on July 19, days before the Presidential call,” said Sondland.

Sondland: "Everyone was in the loop. It was no secret."

“As I communicated to the team, I told President Zelensky in advance that assurances to ‘run a fully transparent investigation’ and ‘turn over every stone’ were necessary in his call with President Trump.”

SCHIFF: Mr. Sondland would you like to implicate anyone in crimes

Sondland also said his team was obligated to work with former mayor Rudy Giuliani, and that Giuliani frequently mentioned “investigations” leading up to his infamous phone call with Zelensky, meaning he knew about Trump’s intention as well.

“Actually, I would have been more surprised if President Trump had not mentioned investigations, particularly given what we were hearing from Mr. Giuliani about the President’s concerns,” Sondland testified. Sondland seemed to think investigating Biden was Giuliani’s idea and something he pushed on Trump to some extent

Who will be the final stooge standing? Stay tuned to find out.