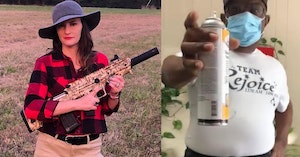 A South Carolina woman running for the House of Representatives made a fuss this week after an incident at the polls that started when she refused to wear a mask.

Jennifer Brecheisen shared video to her Facebook claiming she “got singled out and bullied big time” by a poll worker who reportedly offered her a mask when she and her husband showed up not wearing them.

When Brecheisen refused his offer, Earl Moore cleared out the voting room so that the couple could vote without potentially exposing others to COVID-19 if they’re infected without knowing it.

But this was apparently so offensive to the Republican candidate that she turned her camera on to chastise Moore and accuse him of trying to force her to wear a mask.

“You can’t require people to wear masks in here,” she says in the video.

“I’m not keeping you from voting, ma’am,” he replies. “But I’m not going to stand here and argue with you, either.”

At that point, Brecheisen accuses him of bullying her, and repeats her claim that he’s trying to require people to wear a mask, despite her and her husband successfully voting without putting masks on mere minutes prior to the video.

“You cleared out the whole building like I’m some kind of disease,” she complains. “I’m not a disease.”

She also claimed she felt “threatened” by Moore’s can of disinfectant spray, and attributed it to sheer luck that he waited to spray it until she had finished her tirade and left the room.

After posting the video to Facebook, Brecheisen received support from other anti-maskers as well as push back from the many Americans deeply frustrated with her refusal to help keep others protected in a pandemic. She subsequently lamented that this is “what a person may have to go through when they publicly stand up for freedom,” and insisted that she doesn’t believe in cancel culture, despite her own attempt to publicly shame Moore for doing his job.

“We’re in a closed room with a lot of people in it, and I’ve got somebody refusing to wear a mask,” Moore told The Post and Courier. “Why should I take the risk of her infecting other people?”

The current mask situation in Chester County, where the incident occurred, is complicated. A local ordinance requires masks to be worn inside public buildings, but South Carolina’s Republican governor, Henry McMaster, issued a statewide order specifically prohibiting mask requirements in polling places, proving yet again that wearing a mask during a pandemic is a shockingly partisan issue in the U.S.