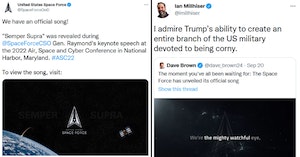 After nearly three years of existence, the Space Force formed under Donald Trump finally has its own cute little theme song like the other branches of the military, so they can sing it while dressed up in their adorable matching outfits.

Unfortunately, even after all that “research” and songwriting that went into a tune that lasts about 35 seconds, the general reaction by the public has either been complete disinterest or pointed mockery.

The song, called “Semper Supra” (Latin for “Always Above”), was released to the world on Tuesday, including on Twitter where people were bound to make fun of it. The Space Force hasn’t exactly been a welcome addition to the U.S. military for many people since its founding in late 2019, in large part due to its association with Trump, who took credit for it.

The branch also received heavy scrutiny over its logo, which looks suspiciously similar to something from Star Trek. This may have been either intentional or inevitable, but either way, it makes it a little difficult to treat this new arm of a massive military force seriously.

Of course, that started with its very name, which is clearly supposed to be a play on “Air Force” but sounds so silly that people could hardly believe it wasn’t a joke at first.

They’ve had the same problem with the anthem, which manages to have both Star Trek and Big Brother vibes.

“Boldly reaching into space,
There’s no limit to our sky.
Standing guard both night and day,
We’re the Space Force from on high.”

The melody and general vibe of the song has been compared to Mel Brooks’ “Jews in Space” from History of the World, Part I, and not exactly in a favorable light. A number of folks feel that they should have just paid the comedy legend for the rights to this objectively better song.

It was crafted by former U.S. Air Force band member James Teachenor and Chief of Space Operations Gen. John “Jay” Raymond. The two of them apparently spent almost three years coming up with this.

“It was created to capture the esprit de corps of both current and future Guardians, and intends to bring together service members by giving them a sense of pride,” the Space Force press release reads. “Two former service members collaborated to create the song, a process that took years of research and revisions to make sure the song was ready for release.”

After all that work, the reviews are in, and they’re not great.