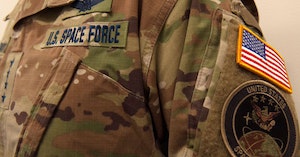 Twitter Is Dunking On The New Space Force Camo-Print Uniforms

Donald Trump wasn’t going to leave office without creating the first new branch of the military we’ve seen in 70 years. It was basically inevitable. Since he was also about to escalate the conflict with Iran around the same time this new branch was created, a lot of people missed the news about Space Force, a company of soldiers being trained to fight in space.

Trump wanted the Space Force to exist as a separate unit from the Air Force, the branch that has technically been responsible for monitoring space safety, as much as it is needed. What’s actually happened, according to The Atlantic, is that Space Force will operate within the Air Force, sort of how the Marine Corps is a part of the Department of the Navy. The same unit that focuses on space operations will continue to do so. Only now they’re SPACE FORCE. Once again, Trump has just rebranded something and slapped his name on it.

It still wasn’t really noted until pictures of the “new” Space Force uniforms were released to the general public, causing people to raise their eyebrows:

Notice anything weird? Well, for one, space as humans have experienced it is largely devoid of trees. If there was plant life on other planets, it would really change the game. These uniforms will not be doing much to help any Space Force soldiers blend in with moon rocks, as people rushed to point out:

Gotta say, I’m a little disappointed with the camo. And considering your leader, this is probably more on point. pic.twitter.com/aw4q9KT1MP

The only explanation I have is that The #SpaceForce will be invading the forest moon of Endor.

I doubt the US has learned that an occupying military has little chance of conquering the Ewoks.

They are eerily similar to our Earth Force uniforms.

Pretty sure your uniforms should look more like this. It IS space, after all. pic.twitter.com/1hbl8kkDSE

Really disappointed with the green.

Surely a pattern like this would have given more camouflage in space. https://t.co/A1eAJkSk1e pic.twitter.com/7lUGAyRqTD

The Department of the Air Force has responded to the mockery with some dry comments about  using “current Army/Air Force uniforms” to save money and adding that Space Force soldiers “will look like their joint counterparts they’ll be working with, on the ground.”

Members will look like their joint counterparts they’ll be working with, on the ground.

An admission that has people realizing whats the Space Force is really all about:

The Middle East is *technically a space