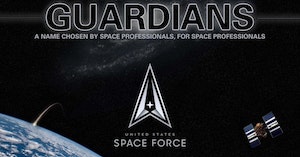 The United States Space Force seems silly, because it’s an arm of the military designated to protect the U.S. from space threats. Over the last few years, there have been various reports that aliens are real and they’re not into us, so maybe it’s not a bad idea. But until I actually see an alien spaceship land in Prospect Park, I don’t think I can take them seriously.

The official Space Force Twitter account announced that service members on the team will not be called Space Soldiers. They’re going to be called “Guardians.”

“Today, after a yearlong process that produced hundreds of submissions and research involving space professionals and members of the general public, we can finally share with you the name by which we will be known: Guardians,” they wrote.

Did this research involve watching films from the Marvel Cinematic Universe starring Chris Pratt? If so, they’re not admitting it:

People are not taking any of these very serious statements seriously, because it totally seems like an entire branch of government is just committed to cosplay. And funding more arms of the military with our tax money.

A few people also noted that the phrases “heritage” and “culture” as part of the Space Force mission of policing unexplored space is probably yet another racist dog whistle coming from the Trump administration.

So you know it’s really bad.