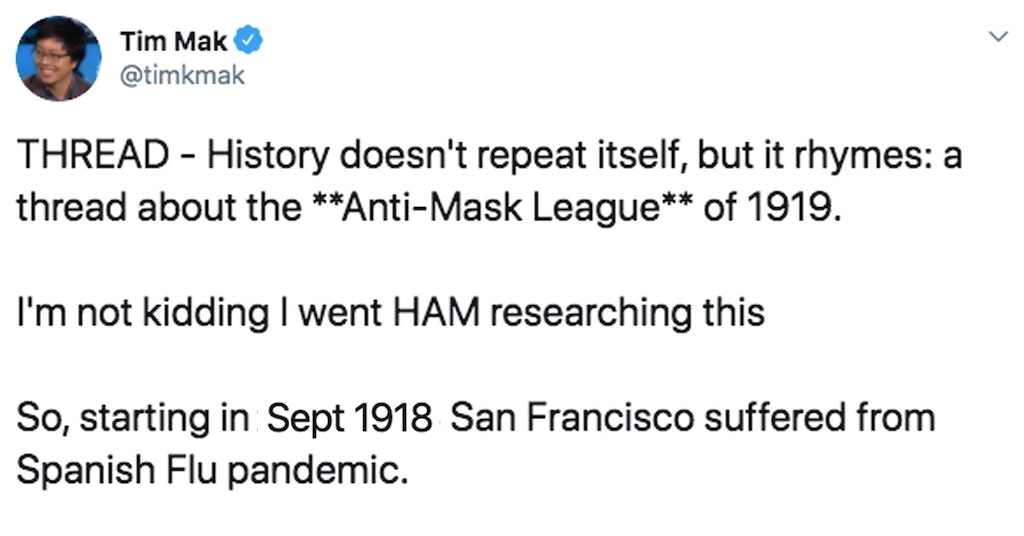 While there is no direct comparison to what we are facing with the coronavirus outbreak across the world, the closest we can get is that of the Spanish Flu back in 1918. It’s been cited as a warning time and time again by people who are concerned that once we’ve made progress flattening the curve this time around, folks are going to start going back out again and we’ll be hit with a far more devastating second wave of COVID-19.

That’s what happened back in 1918, and, without a vaccine, it seems likely that is what will happen in 2020 as well.

But that isn’t where the similarities between the two end.

NPR Correspondent Tim Mak posted an epic Twitter thread over the weekend after digging into the archives and discovering how prominent protests against the government’s recommendations to wear masks were in San Francisco during the Spanish Flu.

“Initial mask wearing was good — around 80 percent,” he begins. But San Francisco residents got anxious after several months of following the rules and being kicked out of their normal routines. And when the city re-opened, nobody wanted to stick to wearing masks anymore.

Protestors claimed being forced to wear masks infringed on their rights.

And just like that, we’re immediately thrown into the similarities between the refusal to wear masks a hundred years ago and the protests that have already begun against wearing them now.

“Was the death rate high enough to justify remasking? Wasn’t this just the return of normal seasonal colds?” they asked.

Masks remained voluntary, and the rate of infection grew.

Eventually, masks were made mandatory, but that didn’t stop the protests.

Over 2000 people gathered as part of the Anti-Mask League. It’s unknown how widely infection spread because of that event, but, as Mak says, it’s “safe to say it was not helpful during [a] pandemic.”

Requiring masks marked the beginning of the end of the Spanish Flu in San Francisco.

The number of new cases and deaths in the second wave began to decline.

But of course, masks weren’t given the proper credit.

Experts have been saying that if we manage to get COVID-19 numbers down, people will say all the measures put into place were unnecessary when in actuality it will have been those measures that reduced harm to begin with. The same thing happened in San Francisco with the Spanish Flu.

All in all, the similarities are unnerving. But not wholly unexpected.

In conclusion: wear your masks!!