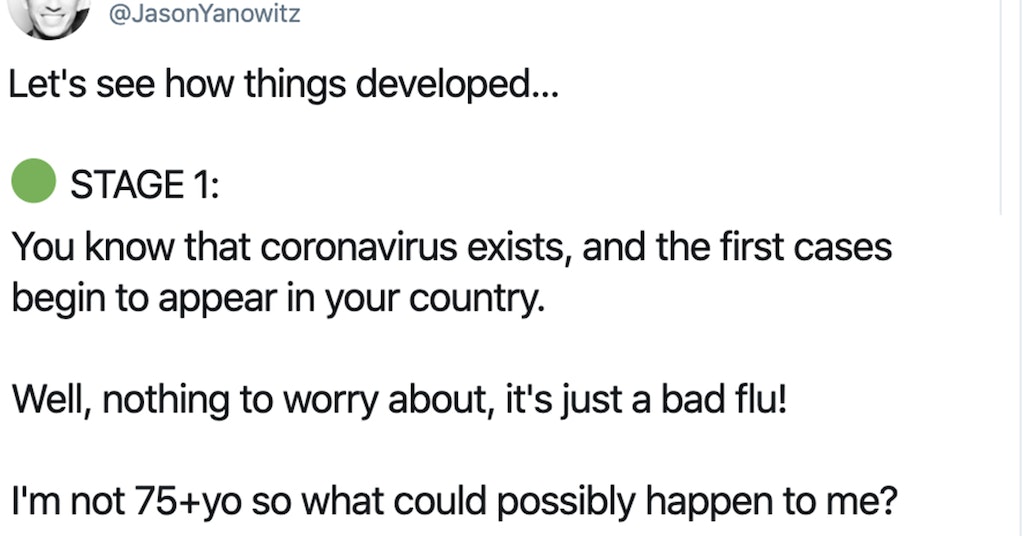 Italy is in lockdown as they desperately try to slow the spread of COVID-19. Already, hospitals are overwhelmed by patients who need emergency medical treatment. Many, many have died. And here in the U.S., we’re about one to two weeks behind them in terms of the virus’s spread. No one is exactly sure how things will develop.

People are being pressured to stay home and social distance if they can now, but that isn’t the same as government action and support. Some individual cities have made the decision to shut down businesses that are non-essential, but the federal government has not taken the steps it needs in order to stop the disease from spreading farther.

And there are also lots and lots of individuals who don’t really get what the big deal is. If they’re not sick or they don’t know anyone who is sick, they don’t believe it’s all happening or that things can get that bad here.

A man named Jason Yanowitz decided to share a thread created by someone who says they’re in Italy, because he wants everyone in America to knows what’s going to happen.

It starts, “To the rest of the world, you have no idea what’s coming.”

If you'e still hanging with friends, going to restaurants/bars, and acting like this isn't a big deal, get your shit together.

The following thread is taken from an Italian citizen.

As they put it:

"To the rest of the world, you have no idea what's coming."

The thread explains the stages of the coronavirus taking over the country, starting with hearing about a few isolated cases, going up towards isolating only small areas (from which many people leave, bringing the virus home with them), the overwhelming number of people hitting the hospitals, and then mandatory quarantine for an indefinite amount of time.

You know that coronavirus exists, and the first cases begin to appear in your country.

Well, nothing to worry about, it's just a bad flu!

I'm not 75+yo so what could possibly happen to me?

They declare "red zone" and quarantine one or two small cities where they found the first cases and a lot of people were infected (Feb 22nd).

Well that's sad and somewhat worrisome but they're taking care of it so nothing to panic about.

The number of cases is rapidly going up.

They almost doubled in one day.

They declare red zones and quarantine the 4 regions where the majority of cases are registered (March 7).

In Italy 25% of the county is under quarantine.

…so around 10k people from the red zone escape from the area that same night to return to their homes in the rest of Italy (this will be important later).

Most of the population of the remaining 75% of Italy still does what it always does.

The number of cases is heavily increasing.

Schools and universities are closed everywhere for at least a month.

It's a national health emergency.

Hospitals are at capacity, entire units are cleared to make space for coronavirus patients.

There's too many cases of pneumonia, too many people who need ICU and not enough places for everyone.

At this point is like being at war: doctors have to choose who to treat based on their survival chance.

People have died because there wasn't any more space.

I have a doctor friend who called me devastated because he had to let 3 people die that day.

Nurses crying because they see people dying and can't do anything aside from offering some oxygen.

Remember the 10k idiot who ran from the red zone to the rest of Italy?

Well, the entire country has to be declared under quarantine (March 9).

The goal is to delay the spreading of the virus as much as possible.

Now there's fear, you see a lot of people with masks and gloves around but there are still are people who think that they're invincible, who go to restaurants in large groups, hang out with friends to drink and so on.

There are a lot of police check points.

If you're found outside without a valid reason you risk a fine up to €206.

That's what the situation is like now today as of the March 12th.

Keep in mind that it all happened in around 2 weeks…

In the final thoughts of the thread, the author reminds the reader that these stages all took place in about two weeks. That’s how fast things got serious in the U.S.

It’s not that the virus itself is deadly for everyone, it’s that the consequences of how it hurts families, communities, the economy, and normal life are so dire.

And not because the virus alone is particularly dangerous or deadly, but for all the consequences it brings.

It's hard to see all these countries act like it's not coming and not taking the precautions that are necessary for the well-being of its citizens while they still can.

Please if you're reading this try to act in your best interest.

Our government for once did a good job I must say.

The actions taken were drastic but necessary, and this may be the only way to limit the spreading.

They're taking measures to protect us citizens such as probably suspending mortgage payments for next months, help for shop owners who were obligated to close and so on.

If there are cases where you live, then the virus is spreading, and you're maybe 1-2 weeks behind us.

But you'll get to our point eventually.

PLEASE take any precaution you can take.

Don't act like it's not going to get you.

If you can, STAY HOME.

Someone posted the Reddit thread from where this was sourced, and it is filled with comments from others in Italy saying it was all true. There are also people from other countries commenting that they have gone through the same stages—the main difference from the U.S. is that there the government is taking things seriously instead of downplaying the threat. Protect yourselves like you want to outlive this administration.