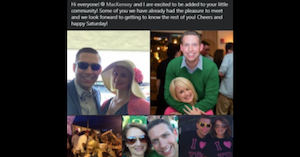 Pro-Trump Gov. Candidate Reveals He Was A Swinger But Assures Base It Was Only Heterosexual Swinging

The Mayor of Sandy, Oregon and Republican gubernatorial candidate Stan Pulliam made an effort this week to assure his voting base that he is heterosexual. Pulliam became the topic of political controversy when it was revealed that he and his wife MacKensey Pulliam were part of a swingers group on Facebook.

Pulliam, who identifies as a conservative, joined the group back in 2016 according to a Facebook screenshot. The post read: “Hi Everyone! MacKensey and I are excited to be added to your little community. Some of you we have already had the pleasure to meet and we look forward to getting to know the rest of you.”

Pulliam spoke to the post, telling the Willamette Week that he and his wife, “explored relationships, mutual relationships with other couples, for a brief period of time before ultimately deciding that it wasn’t for us.”

“There are different stages of marriage and different ebbs and flows. This is something that was for a brief period in our past and is in the past.”

Pulliam, who was an avid supporter of former President Donald Trump, found himself having to defend his heterosexuality when his voting base began to speculate that Pulliam might have had sexual experiences with other men during his time as a swinger.