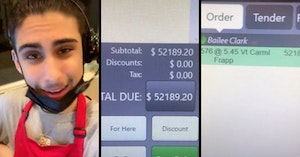 Possibly the most massive Starbucks order in history had TikTok viewers reeling.

@esha_crosby, who works at Starbucks and regularly posts videos about his job, shared an order that came in for 9,576 venti caramel frappuccinos, which appeared to cost a whopping $52,189.20.

“I’M DONE,” he captioned the video, “this person needs to be my sugar daddy.”

According to some math based on existing information about Starbucks sales, the average number of drinks sold per Starbucks store per day hovers around 388. Even if you take into consideration that the busiest stores could double, triple, or even quadruple that number, it doesn’t come anywhere close to that horrifying number of nearly 10,000.

As such, viewers weren’t sure what the best course of action would be upon receiving such a mind-number order.

“There’s absolutely no way this is real, it’s impossible to make THAT MANY r u kidding,” wrote @midnightpuker.

“Those frappuccinos will be melted by the time they’re done making them,” @grilledcamwich suggested.

And @httpskeith had the right idea when he said, “That’s when I would mind my business on register and not try to go on bar for the rest of my shift.”

While there was definitely some debate on whether or not this was real, @esha_crosby’s video did show a bunch of ticket printouts, which won some folks over to believing. He also claimed in a later video that they closed the store and spent the whole day working on that order.

But what I think we really need to know — if this truly happened — is how on earth somebody picked up and transported nearly 10,000 frappuccinos. And where. And WHY.