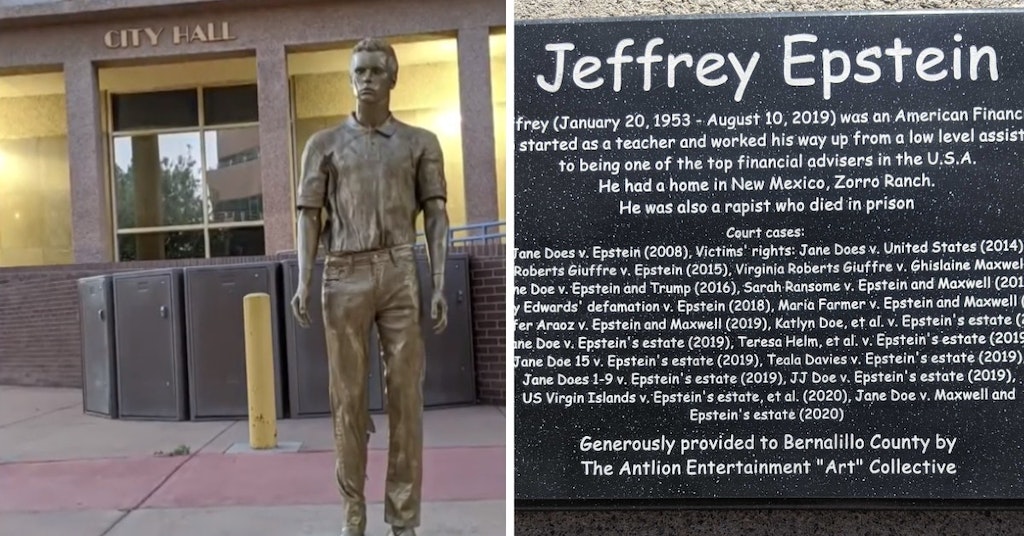 Residents of Albuquerque, New Mexico were surprised Wednesday morning to find a statue of Jeffrey Epstein had mysteriously appeared outside of City Hall, gifted to the state by an anonymous group calling itself the Antlion Art Collective. The statue included a plaque briefly summarizing Epstein’s life, written in Comic Sans and ending in the fact that he “was also a rapist who died in prison.”

People were initially confused as to the statue’s intended message, but an anonymous member of the art collective went on local news to explain that it is absolutely meant to troll Donald Trump and the larger Republican party on their whining about Confederate monuments coming down.

“You know, so many statues are being taken down, but you know, people are saying that they’re bad people, so you know maybe we just need more statues of people like Epstein because that’s historical too,” they explained through a voice modulator.

“So we maybe need statues of people like Epstein. Maybe schools can even have statue parks with people like Hitler, and Mao and Lenin just so that we can really remember history.”

A viewer sent this to me- they said it is a statue of Jeffrey Epstein and that it was placed in downtown ABQ Wednesday morning. The viewer said the person who placed it there kept yelling: "If we don't have a statue of Epstein, how will people learn?" @krqe pic.twitter.com/vwAe5Smjwo

Epstein rapidly became a national figurehead for corruption and depravity among rich elites after he was arrested following widespread allegations of using his private island for human trafficking, with much of it involving children. He was arrested and reportedly committed suicide in prison, but that particular ending for Epstein was called into question, to put it mildly.

Donald Trump was formerly friendly with Epstein, appearing in a few choice photos with him and some women who looked quite young.

The statue has been removed by Albuquerque officials, but not before the Antlion Art Collective managed to confuse an entire nation.

what the fuck is happening https://t.co/pPPgprt1gY