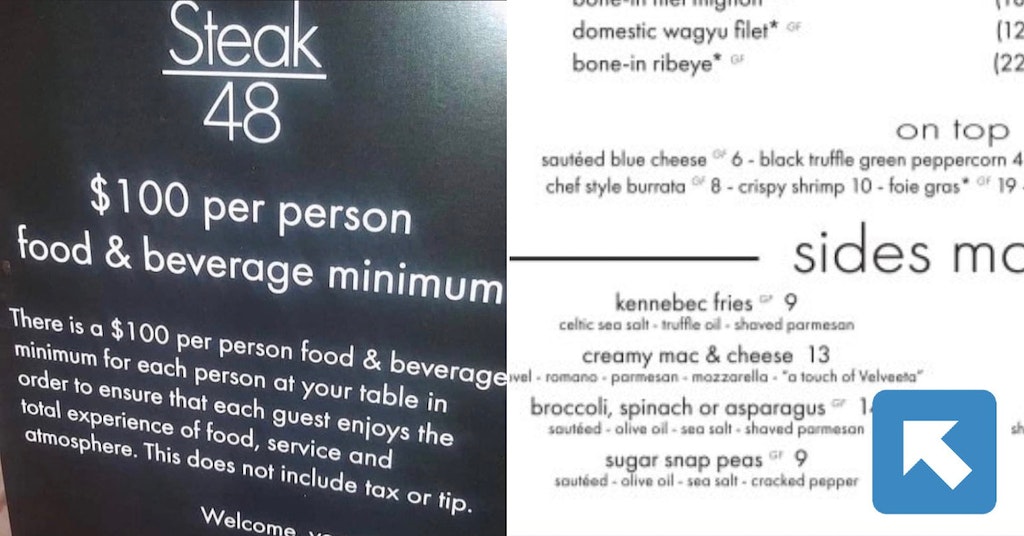 Steak 28, a nationwide steakhouse chain that self-describes as “upscale,” is getting some heat for a policy that is either new or recently discovered by the internet which requires patrons to spend at least $100 on food and drinks for each person if they want to eat there. This policy is stated up front on the website for the restaurant’s Philadelphia location as well as warning prospective patrons about their “strict dress code.”

“There is a $100 per person food & beverage minimum for each person at your table in order to ensure that each guest enjoys the total experience of food, service, and atmosphere,” the website states. “This does not include tax or tip. We look forward to welcoming you.”

The company does not clarify on how spending less than $100 for a single meal detracts from the “total experience” of an overpriced steak.

Many people are not fans of the restaurant’s dress code, either, with some complaining that it’s too strict to the point of being ridiculous and others accusing the company of outright racism. Steak 48 currently prohibits most athletic attire, shirts with “large images, screen printing or large logos, large writing or characters,” hats on men, anything that shows too much skin, and anything that might be associated with being poor such as “frayed or torn clothing.”

It’s not unusual for high-priced restaurants to have dress codes or even certain minimums on food and drinks ordered, but Steak 48’s policies appear to be a bit more extreme than most. In a country where the divide between the rich and poor has never been larger and the younger adult generations have captured significantly less wealth than their elders due to factors entirely outside of the control, these requirements aren’t exactly sitting well.

While a few people defended Steak 48, making fun of the people who just go their for appetizers and Instagram photos, the majority of comments seemed to be on the side of those who just want to eat in peace and don’t like Velveeta in their $13 macaroni and cheese.

Experts in restaurant public relations aren’t sure that these strict policies are a good move for Steak 48 as they try to recover from the pandemic. With many people still wary of dining indoors around strangers, many establishments are doing whatever they can to attract more customers rather than creating barriers to entry, and the wide availability of other steakhouses could make this more of a boon to their competition than anything.

“My guess is, they don’t have anything that can’t be replicated,” said Foodservice Results CEO Darren Tristano. “There’s way too many steakhouses out there and restaurants to go to have a nice experience, and that’s going to be a learning experience for them.”