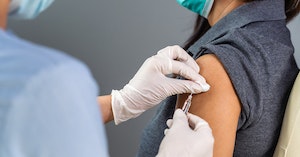 Another man who mocked vaccines and COVID safety has died after being hospitalized with the virus.

34-year-old Stephen Harmon begged for prayers in his final tweet earlier this month, as his body tried and failed to fight COVID-induced pneumonia.

“i’m choosing to go under intubation, i’ve fought this thing as hard as i can but unfortunately it’s reached a point of critical choice & as much as i hate having to do this i’d rather it be willingness than forced emergency procedure. don’t know when i’ll wake up, please pray,” he wrote, according to KCAL9. His Twitter has since been locked.

Prior to that, he riffed on a Jay-Z song, writing “If you’re having email problems, I feel bad for you, son. I got 99 problems but a vax ain’t one!”

Harmon was a member of Hillsong Church, the Los Angeles congregation known for its celebrity members such as Justin Bieber and Chris Pratt. He was so entrenched in the church that he also attended Hillsong College, and reportedly posted memes about how believing in the Bible was more important than trust anything from Dr. Fauci regarding the pandemic.

Commenting on Harmon’s tragic and likely avoidable death, Hillsong pastor Brian Houston said that they “encourage those in our church to follow the guidance of their doctors,” but ultimately believe that getting vaccinated “is a personal decision for each individual to make.” In other words, like many U.S. churches, they’re not willing to risk alienating anti-vaxxers in order to protect the remaining members of their congregation.

Roughly 58% of Americans over the age of 12 are fully vaccinated, with an NBC News poll showing that a whopping 80% of those who haven’t yet gotten the shot admitting they either definitely or probably will not get it. Yet between December 7 and June 7, before the Delta variant began having a serious impact, 99.8% of COVID-related deaths in California were among the unvaccinated.

But anti-vaxxers, like Harmon, don’t even seem to change their tune even when they’re hospitalized and facing death. According to CNN, his social media indicated he still didn’t intend to get vaccinated if he recovered.

“If you don’t have faith that God can heal me over your stupid ventilator then keep the Hell out of my ICU room, there’s no room in here for fear or lack of faith!” he tweeted, just three days before he died.