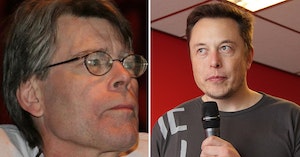 Famed horror writer Stephen King is once again making better jokes than Elon Musk could ever dream of conjuring with a recent tweet hitting the billionaire where his pocketbook is hurting the most — the fleeing Twitter advertisers.

Referencing the recent reports that scores of advertisers, including around half of their top buyers, have either announced they’re leaving or have just stopped posting ads, King quipped that soon there will only be one ad left to see on the crumbling platform.

“Pretty soon the only advertiser left on Twitter will be My Pillow,” he wrote.

High-paying advertisers began dropping from the social media giant soon after Musk took over, with many pausing their ads after being advised to do so by one of the top advertising firms in the world. Initially, they were counseled to pause for just a week or so in order to see what the billionaire would do with Twitter and get a sense of the site’s future, but close to a month later, people are noticing that there aren’t nearly as many ads as there used to be.

It’s not your imagination. According to a Media Matters report released on Tuesday, 50 of Twitter’s 100 top advertisers have either declared that they are pausing or ending their ads on the platform or haven’t been seen to post a new ad since Musk took control. Prior to his finalized purchase of the website, these companies alone provided it with $750 million in income in the first 10 months of 2020 and $2 billion since 2020.

Considering the fact that Twitter wasn’t profitable before Musk bought it, which is likely part of the reason he tried so hard to back out of the deal, that has to hurt. On top of those 50, another seven big advertisers have slowed their ad buys “to almost nothing.”

This isn’t particularly surprising after Musk tried to beg advertisers to stay by promising that content moderation would remain about the same, then began to reinstate accounts formerly banned or suspended for hateful conduct. This includes the accounts of antisemitic conspiracy theorist Kanye West and Florida man Donald Trump, who was of course banned for fomenting and praising the January 6 insurrection.

The issue with impersonator Twitter accounts has also not been sufficiently resolved for many companies despite Musk implementing, then killing, then re-implementing a second “official” check for certain accounts after Mario gave everyone the finger.

Although Musk has posted a number of sweaty tweets insisting that everything at Twitter is going great, he has repeatedly lamented about advertisers ditching the site and early on in his reign reported that it resulted in a massive revenue loss. There is no way that the $8 blue check subscription is making up for that, either.

In classic unfunny form, Musk stole the joke that dozens of his fans had already made over and over in a response thread to King to prove how utterly unbothered he is by King’s barbs and the huge money black hole he’s making out of Twitter.

The “Lmaooo” is how you know it’s extra funny.

Having My Pillow, owned by one of the biggest clingers to the lie that the 2020 presidential election was stolen from Trump, Mike Lindell, as the only advertiser left seems like it would be highly appropriate. After all, tweet after tweet by Musk has piled on evidence that he’s exactly the kind of right-winger who would hang with Lindell (though he hasn’t unbanned him from Twitter yet).

In between the Musk stans that have flooded to King’s every tweet with whiny pleas for him to leave Twitter and stop making their ridiculous apartheid emerald mine fave look bad, people are appreciating another fine troll from the writer.