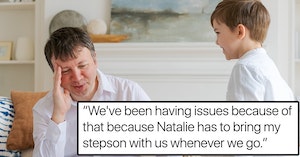 A stepparent-to-be got a talking to on Reddit after he canceled an entire vacation after getting mad that his fiancée wanted to bring her son.

The 33-year-old writes that he’s currently engaged to a woman named Natalie, who he has been with for two years. Natalie has a 10-year-old son named Taylor, and shares custody with her ex.

Apparently, her ex has had health issues recently, resulting in her taking care of her son more often than her future husband would like. He complains that they haven’t been going out as frequently and seems annoyed that “Natalie has to bring my stepson with us whenever we go.”

All the same, he planned a weekend beach vacation just for him and Natalie, in the hopes that her ex was getting better and would be taking care of Taylor.

“The night before the trip she comes up to me and says, ‘hey, Tom is sick again and he asked if I could take Taylor to spend the weekend with us,’” the Redditor writes. “I was gobsmacked I asked what she told him and she said she agreed. She then proceeded to tell me that she’d like to take Taylor with us to the beach. I got upset and told her not to bother because the trip was officially canceled.”

He also acknowledges that he told her that “she successfully ruined yet another opportunity for us to have quality alone time together,” all because she had to, you know, be a parent to her young son.

Ultimately, the frustrated boyfriend decided to go on the trip with his friends instead, leaving his fiancée to watch Taylor at home by herself — and yes, she’s still mad about it.

It’s generally understood that if you’re marrying someone who already has a kid, you’re marrying into the whole family, and the kid is going to come first. Readers did their best to remind the original poster of this, while suggesting he hasn’t thought this situation through.

Although he followed up with assurances that he loves his stepson and “so far [has] been nothing but understanding and patient,” the content of the post didn’t really seem to back that up and redditors deemed this guy one a proper A**hole.