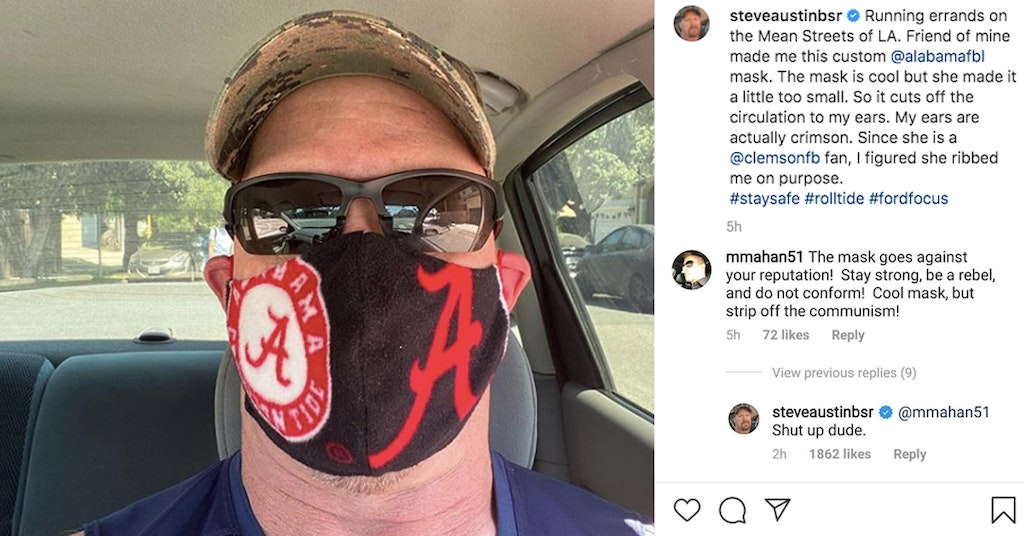 A common refrain among those who refuse to wear masks despite the ever-present threat of a deadly respiratory disease spreading through our communities is that they refuse to be controlled by fear. It’s an attempt to frame those who follow medical advice and wear masks to protect others from potential infection as weak, and prop up those “brave” enough to risk spreading the disease to both their loved ones and strangers as heroes.

While the logic already crumbles at the slightest breath of air, it gets absolutely obliterated every time people known for actual badassery proudly wear masks to protect their communities.

Stone Cold Steve Austin proved that fact when he posted a photo sporting his own mask while he ran errands this week.

“Running errands on the Mean Streets of LA,” he wrote. “Friend of mine made me this custom [Alabama Football] mask. The mask is cool but she made it a little too small…My ears are actually crimson.”

It’s pure insanity to insinuate Steve Austin, one of the most well known wrestlers in history, is a wuss. Even sitting there in his car with a mask cutting off circulation to his ears, he looks like he could rip your head off just by taking his sunglasses off and staring at you a certain way.

But anti-maskers are so freaking devoted to deluding themselves that not wearing a mask is an act of rebellion that some actually tried to knock the retired champ for using common sense and gearing up to go outside.

“The mask goes against your reputation!” wrote @mmahan51. Stay strong, be a rebel, and do not conform! Cool mask, but strip off the communism!”

Not to be bothered with the moronic ramblings of a lesser man, Austin’s response was swift and simple: “Shut up dude.”

The internet basically exploded, because man, that was cool.

Being a rebel might be cool on TV, but doing something really simple to potentially save lives is even cooler. Just ask Stone Cold himself.