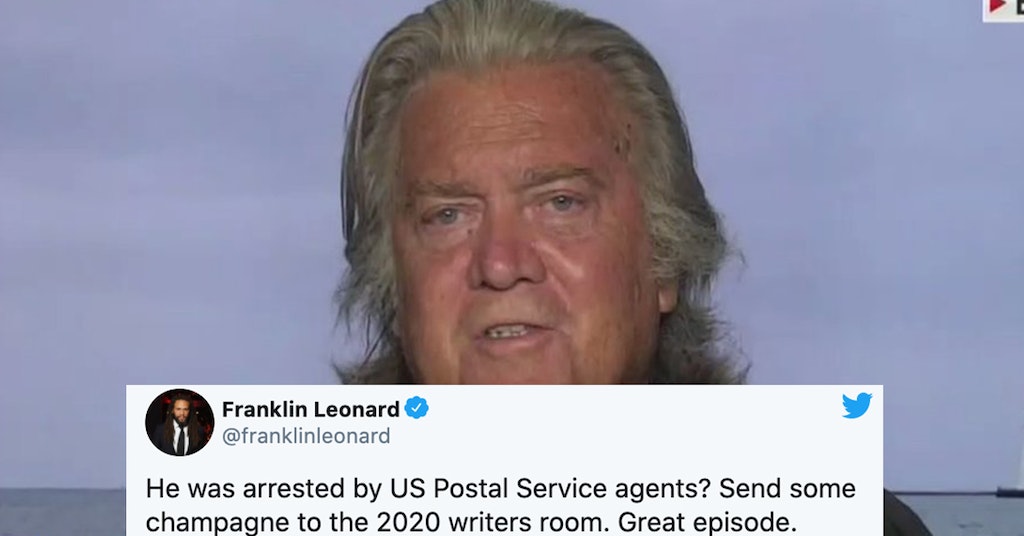 Steve Bannon, the former Chief Strategist to Donald Trump, has been arrested for fraud and money laundering through a non-profit literally called Non-Profit-1. He’s accused of taking more than one million dollars from a “We Build the Wall” crowdfunding campaign for his personal use and to pay a salary to another defendant, Brian Kolfage, CNN reports. Along with Bannon and Kolfage, two men named Andrew Badolato and Timothy Shea have been arrested and charged with “one count of conspiracy to commit wire fraud and one count of conspiracy to commit money laundering.”

The money Bannon and his cronies used was meant to go to sections of a border wall to be built in Arizona and Texas. The cash was raised online, according to the Daily Mail, and the request including a picture of Donald Trump and a stamp reading “Trump Approved.” Trump actually pushed Bannon out of his administration, so I doubt he’s all that happy about hearing the man’s name again.

Prosecutors allege Steve Bannon and his three associates routed payments from the wall campaign through a non-profit and another shell company and disguised them with fake invoices and sham vendor arrangements to help keep their personal pay secret.

But everyone else is having a rare moment of happiness upon reading that Bannon might actually face some consequences in this lifetime. The added detail about Postal Service agents taking him in was just icing on the cake:

He was arrested by US Postal Service agents? Send some champagne to the 2020 writers room. Great episode. https://t.co/63eaY7rHlc

Fate, it seems, is not without a sense of irony.

Those words look good together.

Money laundering is the only laundry Steve Bannon does.

Hero of white supremacists & much of the British/American right Steve Bannon has been charged with one count of conspiracy to commit wire fraud and one count to commit money laundering, "each of which carries a maximum penalty of 20 years in prison." BAHAHAHAHAHAHAHAHAHAHAHAHA. pic.twitter.com/r1I9ysW4HM

It’s has to be said.

If you'd asked me, I think I would have guessed that Steve Bannon would be decent at money laundering? That was dumb of me. pic.twitter.com/RRXrvKocKj

I’m suspecting Trump will start panic tweeting at some point this week, but for now, the White House has refused to comment:

The White House is distancing itself from the Steve Bannon indictment.

WH spokesperson Alyssa Farah: "I refer you to DOJ, this is not a White House matter."

Acting Manhattan US Attorney Audrey Strauss gave a statement on the arrest:

As alleged, the defendants defrauded hundreds of thousands of donors, capitalizing on their interest in funding a border wall to raise millions of dollars, under the false pretense that all of that money would be spent on construction. While repeatedly assuring donors that Brian Kolfage, the founder and public face of We Build the Wall, would not be paid a cent, the defendants secretly schemed to pass hundreds of thousands of dollars to Kolfage, which he used to fund his lavish lifestyle.

Kolfage is actually known as an Iraq War hero, who received a Purple Heart and is a double amputee. He has also been accused of using this ill-gotten money to buy a yacht and take private jets. People really contain multitudes.