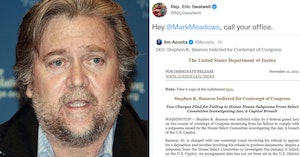 The moment you’ve been waiting for has arrived — Steve Bannon, former chief strategist for Donald Trump, border wall grifter, and all-around white nationalist, has been indicted on two charges of contempt of Congress by the U.S. Justice Department. Liberals across the nation have been demanding this ever since he openly refused to comply with orders from the January 6 committee investigating the attempted coup to appear before them for a deposition and to turn over documents related to the insurrection.

The fear was that without actual legal consequences for this refusal, which would easily land any average American directly in jail, no public figures would ever feel the need to comply with congressional orders and another January 6 would likely follow. Attorney General Merrick Garland faced considerable pressure to indict after receiving the request to do so from the House, and has finally made it happen.

“Since my first day in office, I have promised Justice Department employees that together we would show the American people by word and deed that the Department adheres to the rule of law, follows the facts and the law, and pursues equal justice under the law,” said Garland. “Today’s charges reflect the Department’s steadfast commitment to these principles.”

Each contempt charge would require a minimum of 30 days in jail and carries a maximum of one year in prison if Bannon is found guilty.

Bannon, via his lawyer Robert Costello, refused the orders from Congress in early October on the extremely flimsy excuse that he couldn’t because Trump still has executive privilege even though he’s not president anymore, and Trump told him not to. The problem with this is that Trump does not have executive privilege because he’s not president anymore.

A federal judge officially ruled this to be true on Tuesday, including a statement with a line that rang out across the political left like a rallying cry.

“Presidents are not kings, and Plaintiff [Trump] is not President,” Judge Tanya Chutkan wrote.

Unfortunately, the legal process of convicting Bannon for contempt could be complicated and difficult, according to legal experts who have seen contempt of congress cases get derailed time and time again. Whether or not he will face true consequences for refusing legal orders is looking more and more like a test case for the U.S. justice system, with failure to convict potentially having grave consequences for the future of a nation already stressed under a pandemic and the aftermath of President Trump.

“This is an early test of whether our democracy is recovering,” said Rep. Adam Schiff, committee member.

This indictment announcement comes on the heels of a failure by former White House chief of staff Mark Meadows to appear for his January 6 committee deposition today in spite of explicit threats of contempt charges if he didn’t show.

It seems that Trump and his allies are determined to carry out this fight and subject U.S. democracy to this test. But with the contempt charges against Bannon, Democrats have shown that they’re not going to roll over, and some are speculating that Meadows is probably having some sweating issues right about now.