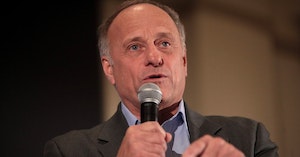 Steve King, Known For His Racist Comments, Lost His Re-Election Bid And People Are Celebrating

In a world where there seems to be little cause to celebrate the machinations of the political system, the news that Rep. Steve King lost his primary bid in Iowa was very welcome. Instead, Republican voters chose GOP state Sen. Randy Feenstra, NPR reports, another conservative Republican politician with a terrible voting record—but one who is not openly in favor using the terms “white supremacist” and “white nationalist” to describe himself, unlike King.

Even Donald Trump once called King “the world’s most conservative human being,” which is really saying something. In the last election, King was elected by only 3 percentage points when he was running against Democrat J.D. Scholten. And District 4 is very red. Other conservatives batted King’s vile words at him like he was a racist piñata and he raised only a third of the money as Feenstra.

Will Feenstra be a voice for reform or anything other than another Trump mouthpiece? Probably not, but ding-dong the Grand Wizard is dead:

Goodbye forever Steve King. Hope I never think of you or hear or type your name again.

Between Steve King and this, tough day for the Confederacy.

Steve king is a racist monster and I’m happy to see him go, I don’t doubt that the guy who beat him in the primary also sucks. pic.twitter.com/CrOWo1IC49

The guy who asked how the terms "white nationalist, white supremacist, Western civilization" became offensive can now think about the answers from his garage. Beat it. #steveking https://t.co/59FPpp2pCh

Pouring one out for Steve King. One of this country’s dumbest elected officials. Here’s a couple of his greatest hits. pic.twitter.com/2bBmIlmcEt

Goodbye, Rep. Steve King. You are certainly not the only white supremacist in federal government, but you were among the most prominent.

It’s a shame Republicans held you up as long as they did.

Though some fear that King will be resurrected somehow, since the entertainment industry is addicted to putting monstrous political figures, like Sean Spicer, back on the air in a frilled shirt:

So, is Steve King going on Dancing With The Stars or Fox News?

Let’s forget Steve King forever as a popped pustule on the face of history, and turn our attention back to the people who will now be making decisions about the future of Iowa and the country. Like Feenstra, who was congratulated by Trump on Wednesday:

Congratulations to Randy Feenstra on your big win in the Iowa Republican Primary. You will be a great Congressman!

There are still elections coming up, many important elections, and the opportunity to knock the slightly less awful GOPers out of office:

???? PLEASE SUPPORT @JDScholten in his fight for #IA04. Just because Steve King lost, doesn't mean the work is done.

Yes, I too, am glad to see Steve King defeated in his primary bc he’s a racist piece of shit, but this pops up immediately when you go to Randy Feenstra’s website so hope everyone in IA-04 is ready to cast their ballot for @JDScholten in November! pic.twitter.com/Prttwdgitp

As we celebrate the (likely) end to Steve King's career tonight, please know that Randy Feenstra is exactly who he told us he was this entire election cycle: a man with the same beliefs as Steve King, but who *whispers* the racism. IA-4 deserves better.