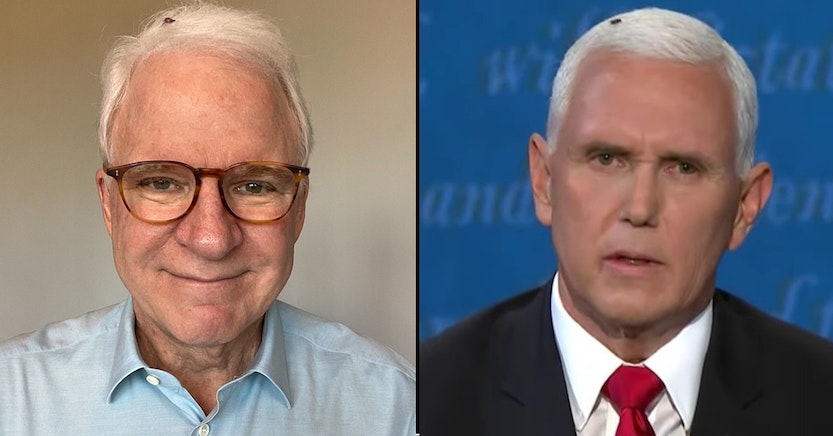 The first presidential debate was a difficult watch. In between President Trump’s constant interruptions and moderator Chris Wallace’s ineffective peacemaking, many viewers came out the other end feeling as though they’d been bashing their head through a wall for an hour and a half.

The vice presidential debate a week later was slightly more tolerable and hugely more meme-able. The most memorable player of the night was, of course, not Sen. Kamala Harris or VP Mike Pence, but the fly that landed on Pence’s head for nearly a full minute.

While it was unfortunate that attention was driven away from Pence’s refusal to answer questions about his administration’s failed response to the COVID crisis, and also from Harris and Biden’s apparent support of fracking, the fly provided some much-needed comedic relief in an otherwise hellish election cycle.

And beloved actor and comedian Steve Martin capitalized on the incident with his simple, perfect Halloween 2020 costume:

“My Halloween costume arrived!” he tweeted on Wednesday afternoon, alongside a selfie of himself with what appears to be a fly on his white hair.

Though plenty of celebrities razzed VP Pence over the incident, Martin is the first to turn it into a Halloween costume.

Presidential candidate Joe Biden also mocked the vice president over the incident later that evening, sharing a photo of himself holding a fly swatter alongside the caption, “Pitch in $5 to help this campaign fly.” The 35,000 fly swatters reportedly sold out within mere hours.