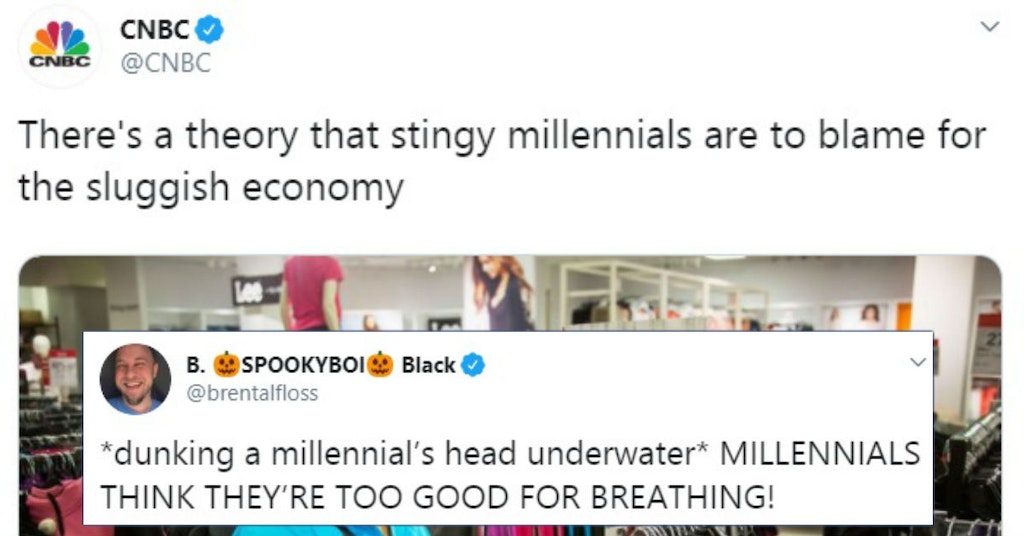 Have you heard? Someone thinks that Millennials are selfish and ruining the economy! What a novel theory that no one else has ever proposed, or at least you might think so if you woke up out of a 10-year coma today and immediately went to CNBC.com.

There's a theory that stingy millennials are to blame for the sluggish economy https://t.co/pLRsc5aSVe

Do you think Millennials are responding positively to this article?

The article is apparently reporting on a “research note” from investment bank and financial services company Raymond James which notes that the younger generation is putting more money in savings than the more “free-spending” Baby Boomers did at their age, and it’s causing all the problems.

“The higher savings rate, we believe, has had disinflationary impact, driving the relatively slow growth and low inflation in this recovery […] causing the incentives for excess supply, and disinflation/deflation biases in the global economy,” wrote Raymond James analyst Tavis McCourt to clients.

This comes after several years of financial analysts, some from the Baby Boomer generation, chiding Millennials for spending too much money on certain types of toast, blaming them for their own money struggles in an era of contract work and zero job stability or benefits, stagnated wages, and skyrocketing rents, student debt, and cost-of-living increases. It’s so bad that many young people, even those considered to be “high-income,” fear that they’ll never be able to save up for retirement.

Even as Millennials have repeatedly explained, yelled, and pleaded that it’s the problems with the economy that are making them unable to spend and an uncertain future that makes them cling to every cent rather than buying houses and diamonds and stuff, they have been repeatedly blamed for the “deaths” of multiple companies and industries. They are predictably tired of being simultaneously blamed for the economy because they don’t spend enough and being blamed for their own economic struggles because they allegedly spend too much.

CNBC itself has been guilty of sending these kinds of double-blame messages.

Meanwhile, billionaires continue to draw billions of out the economy and hoard them in offshore accounts where they do nothing for the country.

The Millennial response to this article is about as predictable as finance companies blaming them for economic issues.

It’s almost like working a gig economy job, paying off huge higher education costs, living hand to mouth, while trying to hang on to ultra-expensive insecure housing has destroyed millennials ability to prop up your country’s credit rating https://t.co/nUHHeWOc7D

Messages to millennials: stop buying $5 lattes you nimrods this is why you’re broke

Millennials Are Killing Being Able To Afford Things https://t.co/jThHXmjMp2

There's also a theory that the interior of the Earth is hollow. https://t.co/MaODpmWLXR