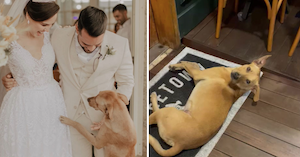 I love when dogs attend weddings. Either as a canine ring bearer or a beloved family member in attendance, dogs make weddings fun and memorable. But what happens when a stray dog shows up at a wedding? Obviously, the couple should adopt it!

And that’s exactly what happened at the wedding of Tamiris Muzini and Douglas Vieira Robert, a Brazilian couple who were surprised when an adorable stray stopped by to watch their nuptials.

The couple was so enamored by the sweet pup that they adopted the dog a few days after the wedding and named it Braiá Caramelo de Jesus.

Bored Panda reached out to the wedding organizer who told more details of the meeting. She said that she was about the form the groomsmen’s line when the dog arrived and sat at the entrance to the church.

They had to move the dog even though everyone found the pup very adorable. No problem — the dog found the bride and hung out with her until she was ready to walk down the aisle. Then the dog lay down at the entrance of the Church until the wedding ceremony was over.

The wedding organizer noticed that the dog’s paw was hurt and he had a bit of trouble walking. But he still made his way to the bride and groom and greeted them after the wedding. The bride apparently said, “I want to adopt him, he’s amazing.”

The dog was clearly a street animal and an orphan. But not anymore! He’s found his family.