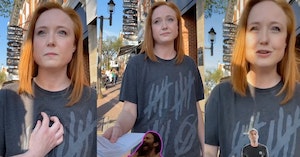 Almost without fail, where there are LGBTQ people happily celebrating their lives in the United States, there will also be religious zealots aggressively screeching the dangers of living in “sin.”

And it seems our Canadian neighbors aren’t faring much better.

“Pride Corner on Whyte” has become an unofficial celebration of queer life in Edmonton, Alberta, every Friday night, in response to street preachers using the space to denounce the LGBTQ community and push their religion.

According to @pridecorneryeg on TikTok, the newest street preacher to join in on the hate has gotten particularly obnoxious, “using young attractive women with a smile aggressively pushing pamphlets into your hands getting into your space after you’ve already politely refused.”

A video shared to their page shows an interaction with a woman doing just that. By the time the camera turns on, the woman is standing in front of them on the sidewalk, insisting that “Christ is the way of salvation” who will save them from their life.

“What life?” the TikToker asks.

“This life of sin,” she replies.

Pushing to see what the woman will actually say, they ask for further clarification about what makes them a sinner.

Finally, the TikToker asks why this woman feels like it’s necessary to go around harassing people on the streets.”

“Because I care about your soul,” she claims.

It’s a familiar refrain to anyone who has engaged in anything that draws the attention of holier-than-thou street preachers — be LGBTQ, go to comic book conventions, voice support for anything that isn’t a Republican talking point…the list goes on. Claiming to have such an altruistic goal as saving you from a life of eternal damnation makes these people feel justified in harassing folks on the street, and nothing can convince them otherwise.

While familiar, it’s also tiresome, and people in the comments shared the same exhausted sentiment as @pridecorneryeg.

“There is nothing as hateful as Christian ‘love,’” wrote @ohboyitscorey. “And how they are going to force it on you.”

“Her privilege is exactly what is expected of these deluded people. Imaginary god beings make them waste their lives on ‘saving other people,” added @eptrouble.

Edmontonians continue to push back against street preachers harassing and berating people at the corner of Whyte Avenue with rainbow banners and dance parties every Friday night, with the hope of eventually officially designating it “Pride Corner on Whyte” and reclaiming it from people spewing hate under the guise of love.