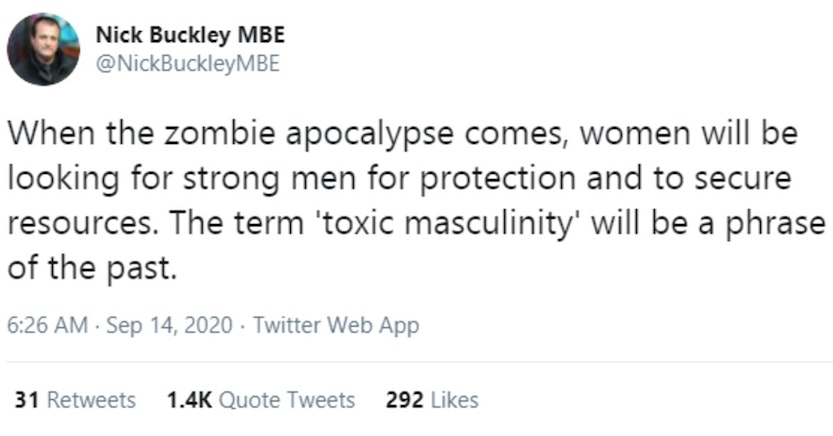 Nick Buckley, member of the Order of the British Empire and man who was fired from his own charity, is being subjected to a whole roasting on Twitter for claiming that during the “zombie apocalypse,” women will forget all about toxic masculinity and look to “strong men” to protect them.

“When the zombie apocalypse comes, women will be looking for strong men for protection and to secure resources,” he tweeted without elaborating. “The term ‘toxic masculinity’ will be a phrase of the past.”

Toxic masculinity refers to a form of masculinity harmful to men, women, and all others, sending the message that one’s “manhood” requires violence, domination, and a rejection of any emotions that might be perceived as showing weakness. Men who are unfortunately affected by this phenomenon tend to react badly when confronted with its existence. They also tend to promote outdated and sexist gender norms.

According to The Critic, Buckley called Black Lives Matter supporters “‘post-modern, neo-Marxists’ who were ‘call[ing] for the destruction of Western Democracy and our way of life.’”

Like many who subscribe to bizarrely misogynistic theories about potential future apocalypse scenarios involving fictional creatures, Buckley is now facing a cascade of jokes at his expense.