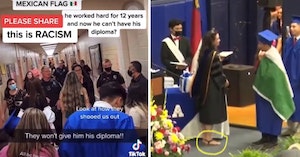 A North Carolina high school is facing some consequences after they refused to hand over a student’s hard-earned high diploma just because he attended his graduation ceremony draped in the Mexican flag. The student, Ever Lopez, says that he did so to honor his family members who didn’t have the same opportunities for education that he did but worked hard to provide better futures for their children.

Word spread about this diploma denial thanks in part to a viral video showing Lopez, his family, and other students being forced from school property by Principal Penny Crooks backed up by a surprising amount of cops.

The video, which went viral on Reddit, accuses the school of racism and is appropriately set to Childish Gambino’s “This is America.”

“It means everything to me,” Lopez said to ABC News. “My parents, my whole family, is from over there. I did it for them because they had a rough childhood; they didn’t get the scholarship that I got, or they didn’t get to go to school like I did. So … representing my flag and getting a diploma was really important to me because I was basically doing it for my family.”

The Asheboro High School has claimed that their withholding of Lopez’s diploma isn’t about the flag itself but about the “dress code” for the graduation ceremony, saying that students were only allowed to decorate their caps if they wanted to express themselves. Many feel like the denial of an earned diploma is an extreme punishment for a simple dress code violation that was meant to honor the sacrifices made by Lopez’s family in the homeland.

The school has said that they will hand over the diploma if Lopez apologizes, but the student feels he has nothing to apologize for.

“I don’t know why I should apologize, when it should be heard, because I did nothing wrong,” he said.

The Asheboro city school district claimed to ABC News that Lopez’s diploma is “available for pickup” and denies that they demanded an apology, and yet also released a statement clearly indicating that they were lying about at least half of that.

“We continue working to resolve this issue with the student and his family so that he will receive his diploma from Asheboro High School,” they wrote. “He has worked very hard and we commend him on this great achievement.”

If he can just swing by and pick up his diploma whenever, then what is the issue that needs resolving?

The blowback on the school district was so strong that not only did they delete the tweets containing this statement, they deleted their entire Twitter account. However, you can still read all the tweets showing how the graduation dress code did not prohibit flags as they claimed and view photos of other, whiter students, as well as Principal Crooks herself, violating the actual dress code rules with zero consequences.

In addition to the Twitter comments, Lopez has received community support in the form of a protest outside the school as well as a petition demanding that the school hand over his diploma and apologize to him for what appears to be targeted racial discrimination.