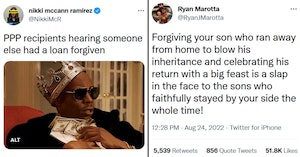 Joe Biden Cancels Up To $20,000 In Student Loan Debt And The Jokes Are Enlightening

After a lot of pressure from progressive organizers and several delays on starting up student loan payments again after they were paused during the pandemic, President Joe Biden finally announced his promised student debt forgiveness plan. Borrowers will see up to $20,000 of their debt erased if they obtained Pell Grants due to low income, and up to $10,000 for others who took out loans to attend a public college or university.

Additionally, income-based repayments will be cut in half to equal only five percent of the individual’s income, down from 10 percent previously, and those who make regular, on-time payments will not be charged interest on their balance anymore. These are game-changing policies for those who have been trapped in a cycle of increasing debt because the interest accrued is more than they can afford to pay every month, leaving people feeling like they will die in debt.

While many were hoping for more, especially after Biden promised to forgive all student debt for public college attendees, the general feeling among those who approve of student debt relief is that this is a good start. Then there are those who apparently feel that if they don’t directly and immediately benefit from any government relief program, then it’s bad and mean to those who don’t need it. It’s incredible how often these folks benefited from forgiven PPP loans.

Predictably, the topic took over Twitter on Wednesday, with anyone and everyone offering their opinions on the matter, many of them rather hilarious. There’s a whole lot of mockery of conservatives and their sour grapes, as well as a surprising amount of Bible references — until you remember that debt forgiveness is mandated in the Bible, and it condemns the charging of interest.

Here are some of the best we could find: