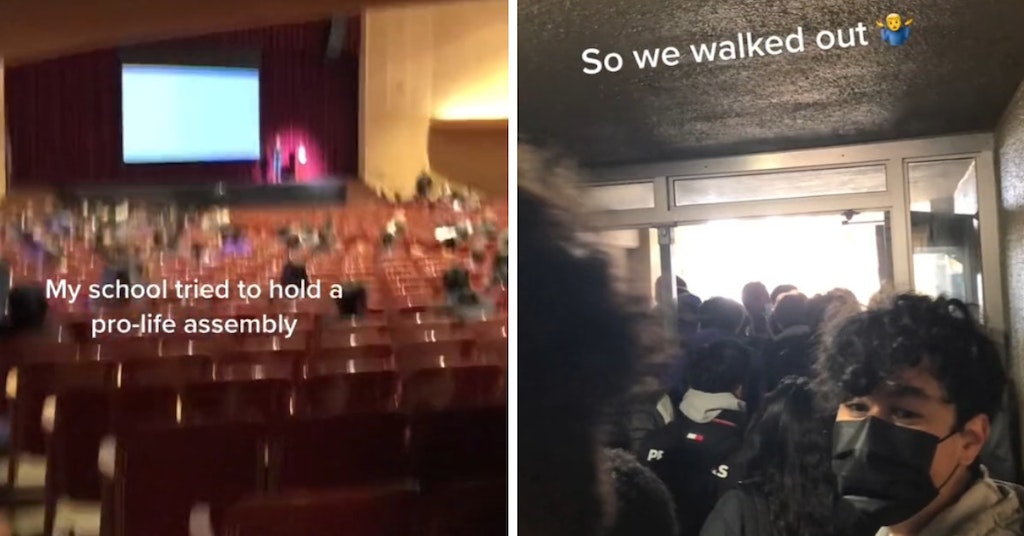 Nearly all of the 800 students made to attend an anti-abortion assembly at a California Catholic school walked out in protest after the presenter compared abortion to the Holocaust. The school, Archbishop Riordan High School, is explicitly pro-life and hired a speaker out of the “Life Training Institute” — a company that trains speakers to go around and spread anti-choice propaganda to any schools that will have them.

Rather than be subjected to said propaganda, all but a few dozen of the 800 students got up and left the auditorium, gathering in the gym to avoid breaking rules against leaving the campus during school hours. The story spread after a TikTok video showing the exiting crowd of students and the few left behind in the auditorium went viral.

“My school tried to hold a pro-life assembly,” says the voiceover. “So we walked out.”

The video shows footage and photos of masses of students leaving the auditorium as well as a screenshot of a local news article covering what happened. In a matter of days, it has gained 2.8 million views in spite of being the very first posted by TikTok user “Nolegon.”

According to the San Francisco Chronicle, the students walked out five minutes into the presentation, which was conspicuously held on the first year that the school welcomed female students, previously being an all-boys high school. Multiple students spoke to the paper to express their irritation with the school for attempting to force them to sit through an anti-choice and antisemitic assembly.

“It’s just so frustrating,” said Claire, who previously attended an all-girls school. “It’s been so hard to go from an environment of female empowerment to someone telling me what I can and can’t do with my body.”

Parents of the students also expressed their disappointment with the school, though they also felt pride in their kids for standing up for themselves and refusing to sit through a propaganda campaign.

“For me, it was poor pedagogy, and it was poor decision making,” said parent Judy Walgren about the school administration.

Walgren was also not impressed by the school’s excuse-making, claiming that the Catholic institution was simply about sharing the “Catholic themes of the dignity of human life.” The Riordan parent would like to know why there haven’t been other presentations on political topics involving lives, asking “where are the speakers about the death penalty? Where are the speakers about how you should go out into the streets in the Tenderloin and wash the feet of the poor and destitute?”

Many commenters on the TikTok video also supported the student walkout and decried the school for holding the assembly in the first place.

“Schools shouldn’t hold assemblies like this,” said one Tiktok user. “Isn’t the place.”

“As a millennial, I am continually in awe of this generation’s dedication to stand up for what’s right [sic],” wrote another. “Proud of y’all.”