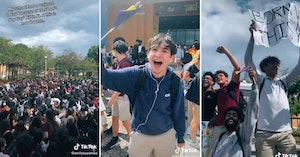 Students at a U.S. high school walked out en masse earlier this month to protest the notorious “Don’t Say Gay” bill passed by the Florida legislature and the resulting TikTok video is giving people hope for the future. The viral video shows hundreds of kids enthusiastically expressing their support for queer people everywhere, chanting “we say gay,” waving rainbow flags, and holding signs declaring that “trans rights are human rights.”

“My school had a walkout today because of the ‘Don’t Say Gay’ bill in FL & this is how it went,” the overlay text reads as cheering and jumping students flood into the courtyard.

The video, which has now been viewed over 3.2 million times on TikTok alone, shows at least two news helicopters in the air. Many of the kids sport rainbow heart stickers and showed of their support for LGBTQ+ people for the camera, one holding up his sticker and saying “I’m an ally.” Others stand on the edge of the school fountain waving signs saying “born this way” and “it’s okay to say gay.”

Others made signs sporting Florida Governor Ron DeSantis’ phone number, inviting people to contact him if they have anything to say about this bill.

The students were protesting the state House Bill 1557, officially titled the “Parental Rights in Education” bill, but was dubbed the “Don’t Say Gay” bill after human rights advocates found that it was less about “parental rights” and more about pretending queerness doesn’t exist. Republicans have repeatedly denied that the bill prohibits the use of the word “gay,” but experts have pointed out that the language of the bill is so vague that it could open teachers up to lawsuits if the topic of gay or transgender people is brought up at all.

Supporters of the bill have also claimed that it only impacts children in Kindergarten through 3rd grade. However, this is a lie. While the bill specifically prohibits any “classroom instruction” on the existence of queer people for these specific grades, it further prohibits such instruction in any grade that is not “age appropriate or developmentally appropriate.”

What is an age appropriate way to talk to students of any specific grade about trans people or sexuality that isn’t straight? The bill does not specify, leaving it up to courts to decide as it allows parents to sue educators they feel have violated the vague language in HB 1557, easily creating a chilling effect that can and will scare teachers from discussing the topics at all. They may even be so afraid of financial ruin that they won’t even dare to say the word “gay.”

The majority of U.S. residents have come out strongly against this bill, which DeSantis has promised to sign into law, and the viral TikTok video soon spread to Twitter where people are pretty much bawling over how alright the kids are. Many commenters expressed how seeing something like this just 15 years ago would have been mind-blowing.