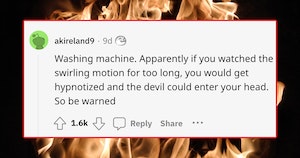 When I was in elementary school, one of my friends was wearing a black-cord necklace, with a pewter dragon pendant dangling from it. In his talons, the dragon held an iridescent, rainbow-colored ball. Some girl our age from another school tore it off my friend’s neck, screaming in terror that it was “the devil holding the world.” My friend was emotionally scarred, and I was appalled—though also bemused by the sheer idiocy.

A few years later, one of the religious mean girls at my Christian middle school told my clique of friends that I was a secret Satan-worshipper because I had a necklace with a piece of rose quartz crystal on it. (Newsflash, Melissa: I bought my Pendant of Nefarious Magickal Powers at Claire’s, the same place at the mall where you bought your lame clip-in hair so your ears wouldn’t stick out as much. But believe me, after all that s—t you talked, I wrote your name in the Dark Lord’s book anyway.)

So, in the spirit of celebrating all things spooky and laughing at the people who get genuinely upset about it, here’s a hilarious (and terrifying) litany of responses people offered up, after Redditor u/aume3 posed the question:

What’s the stupidest thing you ever seen a religious person call “Satanic”?

“Washing machine. Apparently if you watched the swirling motion for too long, you would get hypnotized and the devil could enter your head. So be warned.”

2. A gargoyle (i.e., the statues invented to scare demons away)

“I was a maternity case manager who visited patients in their homes. I arrived at a house to visit a pregnant teenager and her mother. On the porch was a large concrete winged gargoyle statue. I knocked, was greeted and invited in. I mentioned to the mother that I liked the statue, she flipped from cordial and welcoming to raving lunatic ranting about the statue being demonic, possession, that sort of thing. Completely lost her crap. She was terrified of it. She told me to take the statue if I wanted it. I did just that.”

3. Long hair on boys or men (the thing that evil Delilah took away from Samson, to usurp his power).

The funniest part is the fact that Christ himself is always portrayed as having hair that reaches a bit below his shoulders.”

4. Other religions and other churches (especially the ones that don’t hate women or gay people)

“No, no, we dont care about your money and support it’s just… That other church is satanic! Yes! It’s satanic to go to that church!”

5. Wearing the color black (you know, the same color that priests, nuns, and monks wear pretty much every day after ordination)

“So my mom’s friend is a bit overweight and likes to go to church a lot. She enjoys wearing the color black because it’s slimming. Her pastor told her that wearing black all the time was of the devil. Lol.”

“and The Magic School Bus

“Had a Mormon tell me ‘god hates tattoos’ at a small one on my wrist. Pulled my sleeve up to reveal a huge keloid scar and replied ‘god started it.'”

“I do prion research. Apparently this makes me in league with the devil. It’s funny until someone is threatening to shoot up your workplace because of it.”

“Deviled eggs. I cringe every time a family calls them ‘Angel eggs.'”

“If I remember correctly, the leader of the Free Presbyterian church called line dancing satanic”

“In a conversation with an evangelically-religious Christian, he said that my ability to quote the bible so well to ‘make false flaws appear’ was a satanic gift.

Not gonna lie. I was flattered a little.”

“For those asking why, lest we forget that Jazz was invented by black people, and was therefore deemed immoral. They said the exact thing about Rock & Roll in the ’50s.”

“Dude she’s a f–king mouthless talking cat in a dress who has remained the same age for over 40 years. Clearly posessed or demonic.”

“Owls. My mom threw away a beautiful ceramic owl she made years before. I was lucky enough to be at her house and saw it in the garbage and grabbed it. Now it’s a decoration in my house. There’s countless other silly things she claims are satanic. Religion + weak minds = craziness.”

17. Dungeons & Dragons (man…they really don’t like dragons, do they?)

“I had a buddy growing up who got in a lot of trouble with drugs and the cops in the 1980s (“a lot” being a relative thing in the SoCal suburbs, of course). He came home one day to find his mostly non-religious mother had been talked into burning his D&D stuff and heavy metal albums by a bible-thumping neighbor.

Yes, your son has no positive role models, your discipline swings from non-existent to draconian on a whim, you have trouble holding down a job, and you’re an alcoholic… but let’s blame D&D and Ozzy Osborne for your kid’s issues.”

“This one loon I ran into while working as a tour guide in Athens. I’m trying to keep my group intetested with stories between sites and this one tart starts moaning about the mythology as unchristian and I’m like, “m’am, of course it is, it predates christianity.”

She LOST it. Started to basically cry like how could I say that? How could I say something so evil?? God vteated the world and came first and christ camr to die for our sins because these filthy pagans invited satan with their unhodliness.

I told her, m’am that’s really offensive, I’m Greek and you’re insulting my ancestors and culture. She started to scream at me that I was a satanist to the point where I had to call site security and she threatened to sue…”

“This is how I was raised. My Mom would not let me wear pants. Dresses and skirts only. She caught me wear pants one time and whooped my butt for it.

She also had a thing about underwear too.”

“Seasonings. Like, salt and pepper. Yup. I suppose more specifically it would be using the seasonings to change the flavor of a food more than the seasoning itself.

Their logic was that ‘god made everything perfect and just as it should be’ so by seasoning meat to make it taste differently than ‘god intended’ it to taste was ‘rejecting gods gift’ and thus satanic.

So she only ate bland food? You may ask. Oh no, she still had seasonings. ‘But she just said it was satanic!’ Hahaha no no no my friend. You see, she found the loop hole.

Just as it is okay to use chicken broth, noodles, and chicken in the same bowl; it was fine to use seasonings so long as it wasn’t to change the foods themselves. So imagine a burger, instead of a seasoned patty you would have a bland puck of meat with salt and pepper ON TOP of it or one of the other toppings. It wasnt ‘seasoned meat,’ it’s meat with toppings.

As god intended when he elaborately killed himself for everyone to see. I’m sure his dying thoughts were, ‘Linda…. Don’t use seasonings ON meat… Use it.. as a.. TOPPING ahhhhhh………’

And, as one Redditor sums it up beautifully—

“I wanted to go to a corn maze tonight, but I’m already tired from trying to find my way through that logic.”