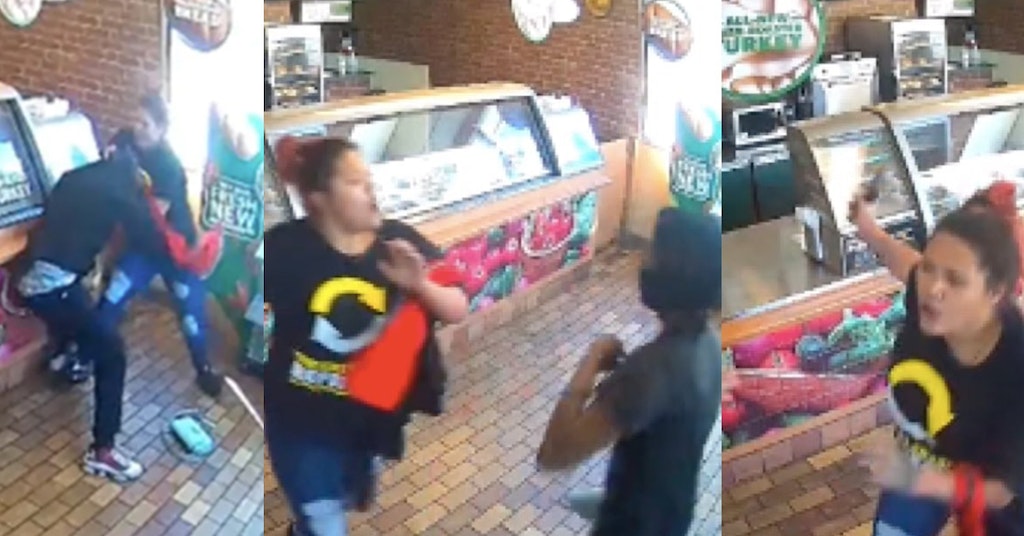 A woman named Araceli Sotelo went viral after an altercation she had at the Subway franchise location she works at was invaded by a masked man. CCTV footage showed the guy entering her store and attempting a robbery. Though she was alone, Sotelo decided to fight back when the guy grabbed her purse.

In the video, which she posted to TikTok, she yells at the guy to stop and threatens to call the police. It should be noted the man is holding a gun, which she eventually kicks out of his hand, picks up, and hits him in the head with it. It’s definitely a power move.

Most people watching the video are probably impressed with Sotelo’s absolute determination, her job was not. After the video began circulating online, Subway suspended Sotelo. She told WTVO, a local Illinois news outlet, that she has been suspended from her job and won’t be welcome back until the video disappears from the Internet. While she could delete her own TikTok video, getting it off the Internet entirely is a challenging prospect.

“I get a call yesterday it was like, ‘If every one of these videos are not taken offline you will be suspended,’ and then I texted them and I’m like ‘How long am I suspended for?’ They said till everything is removed online. I have no ability to do that,” Sotelo said.

She also claims she didn’t originally leak the video and the owner isn’t communicating with her.

“They did not want anyone to know, they wanted to be private that it happened to me and that I fought back, but I think they did that because they do not want corporate to know,” Sotelo said.

Perhaps they wanted to maintain the illusion that Subway is a safe place to eat. Nowhere is safe! Though it is safer with someone like Sotelo there to fight off the gunslingers.

“He kind of just showed me his gun, and I was like freaking out like, ‘woah you can’t do that please leave,'” Sotelo said of the traumatizing event. “[He said] ‘give me all the money’ and I said ‘I do not have any money, like, I do not have any money.’ That is all I had and he was just like, ‘give me everything before I hurt you.'”

“He was smaller than me, so I have that advantage. I’m bigger than him, so I could at least put my weight on him, push him, or something,” Sotelo said.

A GoFundMe was set up by her mother Sylvia Oviedo, originally to pay for phone repairs after hers was broken in the scuffle, but it now has a goal of $20,000 because of her suspension.

The Daily Dot reached out to Subway, and received the following statement from Carsen Anderson, Senior Manager of Corporate Communications at Subway: “We are deeply concerned about the recent incident at a franchised location in Rockford, Illinois. The restaurant owner and management are fully cooperating with the police investigation, and we request patience until that process is complete.”

I think a lot of people would be happy to hire Sotelo after seeing that video, so Subway should jump on hiring her back fast.