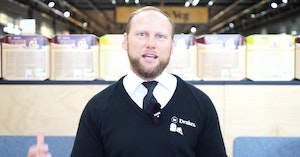 A badass boss in Australia pulled no punches after a panic-buyer tried to return vast quantities of in-demand items to his supermarket.

John-Paul Drake told the story on his YouTube channel during his monthly show, “Retail Wrap.”

“I had my first customer yesterday who said he wanted to get a refund on 150 packs of 32-pack toilet paper and 150 units of one-liter sanitizer,” he said.

For the mathematically challenged, that’s freaking 4800 rolls of toilet paper. Even if you used a whole roll a day, it would take OVER 13 YEARS to get through that much TP.

Drake’s response? He flipped him the bird.

“That is the sort of person that is causing the problem in the whole country,” he complained.

The customer had failed to sell the products at a mark-up online.

In a subsequent conversation with 7News, Drake said that the man wasn’t just some guy who had bought too much product for his personal supply in a panic. Rather, he was one of those jerks who bought up a ton of products with the intent to resell them to desperate folks at a higher price.

But, Drake claims, this guy’s plan was thwarted when eBay cracked down on price gouging in the pandemic and shut down his account.

Rather than take the loss, the customer then tried to return all the products to get his money back, but Drake was already fed up with that kind of behavior.

“I think there’s a lot of people in the situation that we’re in and no one’s prepared to say anything about it,” he said. “But we’re over it.”

The rest of Drake’s video explains how his supermarkets are handling the health crisis.

Specifically in regards to panic buying, Drake said they implemented purchase limits on certain items. The customer who tried to return all his purchases was apparently able to get around the limits because he had a whole team of 20 other buyers with him helping him stock up.

Meanwhile, average people are still struggling to obtain normal quantities of toilet paper, disinfectant, and soap for their day-to-day use.

“The scenes that everyone has seen with the toilet paper has been absolutely ridiculous,” Drake said.

And he’s not wrong.

It may take a while for shopping to go back to normal, and for people across the world to stop spending weeks trying to get their hands on some freaking Clorox wipes, but it’s good to know there are folks like Drake who are absolutely done putting up with this extreme hoarding/price gouging nonsense. Nobody — nobody — needs 13 years’ worth of toilet paper.