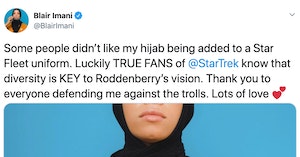 Author and historian Blair Imani dropped jaws at San Diego Comic-Con last weekend with a Star Trek costume that perfectly incorporated her hijab. She cosplayed as Lieutenant Commander Geordi La Forge, complete with VISOR, commander uniform altered to have billowing sleeves, and a full hijab (which manages to be reminiscent of La Forge’s hair). The photos are incredible.

Some people didn’t like my hijab being added to a Star Fleet uniform. Luckily TRUE FANS of @StarTrek know that diversity is KEY to Roddenberry’s vision. Thank you to everyone defending me against the trolls. Lots of love ???? pic.twitter.com/bwVgap6CfO

Jummah Mubarak to every Muslim across the galaxy. I’m finally in San Diego for #ComicCon!#GeordiLaForge, portrayed by @LeVarBurton was born in Mogadishu, Somalia? I guess “will be born” is more accurate since that won’t happen until 2335. pic.twitter.com/p60fg62I4K

Of course, there were your predictable trolls saying the hijab “ruins the costume” or generally being Islamophobic. Imani expertly reminds them that they are missing the entire point of Star Trek, which is all about diversity and tolerance.

“Some people didn’t like my hijab being added to a Star Fleet uniform,” Imani tweeted. “Luckily TRUE FANS of @StarTrek know that diversity is KEY to Roddenberry’s vision. Thank you to everyone defending me against the trolls.”

If you hate Muslims but love Star Trek you didn’t get the message Star Trek was trying to send you.

The second best thing about this, after the costume itself, is the fact that the Star Trek and general geek community overwhelmingly rallied around Imani, shouting down the trolls and bigots.

“The really cool thing was that some people who were being extremely rude were totally shut down by legions of Star Trek fans,” Imani told Today. “Star Trek fans, we’re seen as being very cerebral and very nerdy, and when we can use that nerdiness for social justice, it’s super cool.”

WOWWWW. I ain’t all that, but I’m with you in spirit.
(From my Uhura costume at the 2015 Hugos) pic.twitter.com/L7CuCXMIJB

In response to all the support, Imani made and posted a video explaining why the cosplay was so important to her as a black Muslim individual, including the fact that the character Geordi La Forge was, according to cannon, born in what is today a majority Muslim country.

Last week I debuted my take on #GeordiLaForge from @StarTrek: #TheNextGeneration. Today I am pleased to reveal this video letting y’all know why this interpretation is so important to me.

It looks like the geek community is just about done with people being ridiculous and bigoted about their favorite pieces of fiction, especially when it comes to a franchise that was often and explicitly anti-racist and pro-diversity.

That includes the man who played La Forge himself, LeVar Burton, and William Shatner.

Best cosplay of Geordi, EVER… courtesy of my friend @BlairImani Thank you, little Sister, you honor not only me, but all the kids out there who saw LaForge as a hero. #bydhttmwfi https://t.co/zNAVwXTwuf

And with the public behind her, Imani is going to keep on being amazing with her cosplay.

And yes, you bet I’m Islamifying these looks.