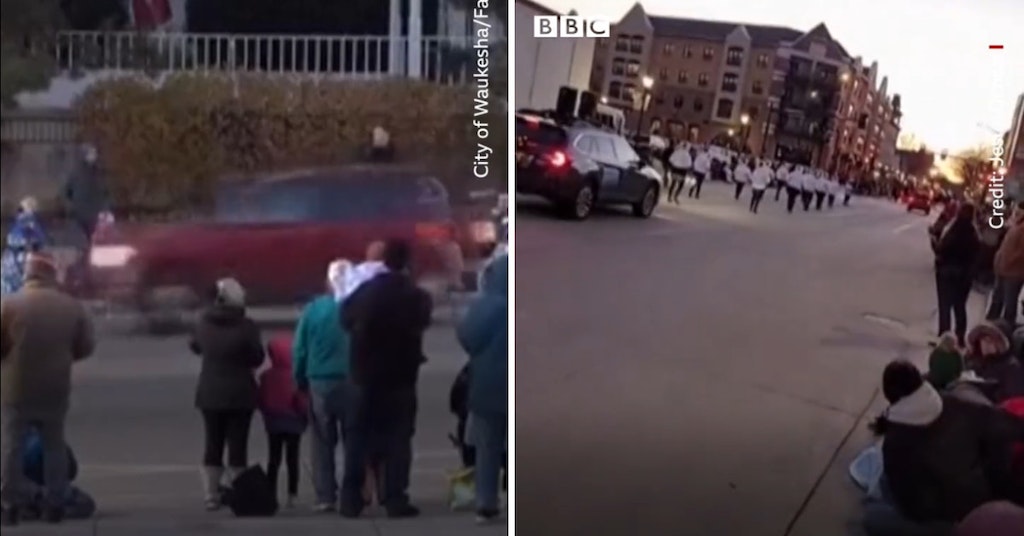 SUV Rams Into Wisconsin Christmas Parade, Killing 5 And Injuring 40—Here’s What We Know

Five people have died and at least another 40 have reported injuries after a red SUV drove into a local Christmas parade in Waukesha, Wisconsin on Sunday night. A 39-year-old man has been arrested as a person of interest in the case as the community works to deal with this mass tragedy. Authorities have suggested that he may have been fleeing the scene of another crime, but no motive has been confirmed.

According to BuzzFeed, the tail end of the parade that was hit by the vehicle included the Waukesha South High School marching band, a group of girls who were waving pom-poms in Santa hats, and the locally beloved Milwaukee Dancing Grannies. A statement put out by the latter group confirmed that multiple performers were among the reported dead.

“Our group was doing what they loved, performing in front of crowds in a parade putting smiles on faces of all ages, filling them with joy and happiness,” the group wrote on Facebook. “While performing the grannies enjoyed hearing the crowds cheers and applause which certainly brought smiled to their faces and warmed their hearts.”

“Those who died were extremely passionate Grannies.”

The nearby children’s hospital reported treating 18 kids ranging from ages three to 16 as a result of the incident, with 10 admitted to the ICU. Of those, six were said to be in critical condition and another three in serious condition. Eight of the 18 have seen or will see the inside of an operating room.

Authorities have stated that the total number of injured may increase after many individuals “self-reported” to hospitals for more minor injuries related to the tragedy.

Some cell phone footage of the SUV driving up the parade route at high speeds, at one point coming close to hitting a small toddler, has been obtained by news media, along with aftermath footage in which screams and crying can be heard among the flashing lights of emergency vehicles.

One police officer working at the parade fired shots at the SUV to try and get it to stop, but thankfully no one was hit. According to CNN, other footage they obtained shows the vehicle hitting the marching band first, directly striking multiple people and running over multiple individuals before fleeing the scene.

“It hit at least two people right away and rolled over them,” said a witness watching from her balcony. “And then continued down the road to People’s Park which is at the end of the block — and then kept going, it didn’t stop.”

Schools in Waukesha were closed today as the community mourns those lost and the living face the traumatic memories of what happened. This year was a continuation of a city tradition after the parade was canceled in 2020 due to the pandemic, but other nearby cities are now considering canceling their own 2021 events out of respect and an abundance of caution.

President Joe Biden made a statement on the tragedy before a speech given on Monday, offering condolences to the families of the victims who are “facing fresh grief of a life without a loved one.”

“Last night, the people of Waukesha were gathered to celebrate the start of a season of hope and togetherness and Thanksgiving,” he said. “This morning, Jill and I and the entire Biden family, and I’m sure all of us, pray that that same spirit is going to embrace and lift up all the victims of this tragedy, bringing recovery from the injuries and wrapping the families of those who died in support of their community.”