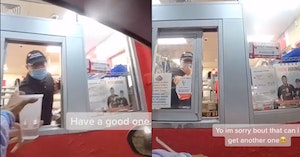 Some social media stars draw in major views with prank videos, but not everyone appreciates them—especially when they’re at the expense of an already mistreated minimum wage worker who gets pulled into some TikTok nonsense outside of their control.

A TikToker who apparently missed the memo about leaving fast-food workers alone filmed a two-part prank at a combo KFC/Taco Bell that has viewers torn.

@liltysie’s first video is pretty harmless and just has him asking employees over the drive-thru speaker how much it would be to order every item on the menu.

“Okay, um, can I get a large ice water?” the TikToker replies.

On that video, the comments skew a little more towards frustration with the employee for being “rude,” though some pointed out the folks on the other side of the speaker clearly knew the TikToker wasn’t actually going to order one of everything, and so why should they entertain him?

The second prank, however, just builds on the minor inconvenience of the first.

The TikToker pulls up to the window to get his large ice water, still filming, and pointedly drops the cup of water after assuring the employee he’s got a hold on it.

The worker reacts loudly to the cup crashing to the ground, whereas @liltysie just calmly asks if he can get another cup of water.

Another employee comes up to the window to ask the first what happened, and is told the customer “dropped the f—king water.”

“It was his fault though,” @liltysie lies.

In an industry where “the customer is always right,” trying to get an employee in trouble for your boring prank is a lame move. Even if it was a good prank, it would be a lame move, but ultimately, calling these videos “pranks” is even a stretch, when a more accurate description would be that they’re videos of some guy harassing employees for no good reason other than he apparently thinks it’s funny.

And this time, viewers weren’t so thrilled.

“Pranks are supposed to be funny,” @bleaksolo replied.

Although @liltysie argued with people in the comments about whether or not the whole thing was humorous, as well as whether or not it was disrespectful, generally people weren’t swayed by anything he had to say.

And @sluttytacobell pretty much summed up the frustration with these videos and others like them: “Fast food workers are human beings not free content.”