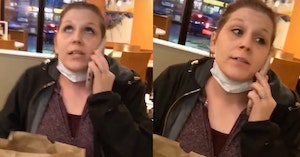 If you asked a random selection of people to list off situations that would make them call the police, they might suggest things like a home invasion or seeing someone waving a gun around, or perhaps a really bad car accident. Some people may go smaller, but it seems unlikely you’d find anyone listing off dissatisfaction with Taco Bell’s menu to the list.

But one Karen apparently considered the offense so egregious that she went ahead and phoned the cops.

A Taco Bell employee took a video of her chatting on the phone on the other side of the counter and shared it to TikTok. While she doesn’t explicitly say who she’s talking to or her reason for calling, @pjmossell’s text overlay says “she called the police cause we didn’t have nacho fries.”

The woman can be heard calling the employees “teenyboppers,” and telling whoever is on the other line that they’re “not doing their jobs.”

Meanwhile, the employees can be heard complaining that she cut the whole line to act like a fool, and one eventually tries to engage the daughter standing next to her who seems completely embarrassed by the whole thing.

Commenters had a lot of sympathy for the kid getting pulled into this whole thing, both by her mother’s embarrassing behavior and being recorded and broadcast to the whole internet.

“Her daughter is no longer fazed to these antics and just numb,” one TikTok user wrote. “You can see it in her eyes.”

“Girl had to go to the deep dark place in her mind to cope,” said another.

Others expressed frustrations with the fact that people are still out here calling the police over things they clearly don’t need to get involved in.

“What are the police gonna do?” asked another TikToker. “Magically make nacho fries appear?”