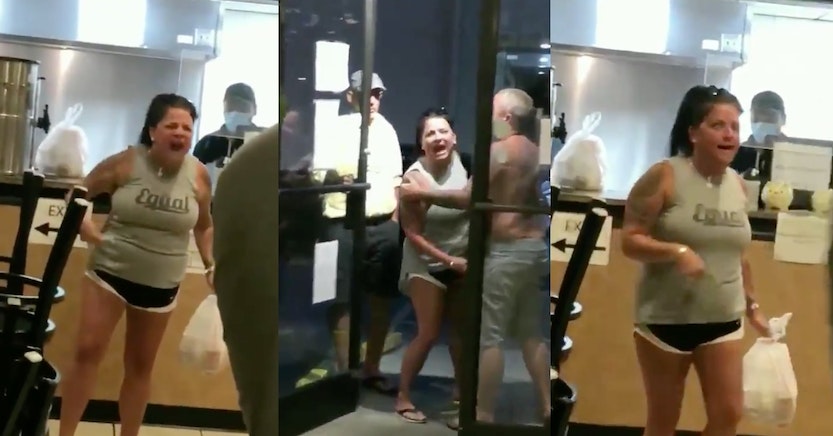 A North Carolina woman went viral over the weekend after she was recorded throwing a temper tantrum in a restaurant after — you guessed it — refusing to wear a mask.

The woman, later identified as Jennifer Kaye, was picking up take out from a restaurant and apparently either refused to wear a mask when asked, or simply took issue with the fact that other people waiting for their food had masks on themselves.

“We don’t cover our face in America! They don’t control us; we’re Americans!” she yells at the start of the video, just after picking up her order.

Backing up towards the door and looking positively deranged as she does some weird body roll, Kaye, who is being referred to as “Take Out Karen,” looks around the room, continuing: “You worship Obama, don’t ya? Peace, love, harmony, Trump 2020, baby.”

Eventually, a shirtless man who was waiting for her outside comes and pulls her out the door even as her rant continues.

We’ve all seen a million of these videos at this point, but the absurdity of the whole thing never stops being novel, on a certain level.

Though it’s hard to know what to focus on, with Kaye doing a solid run from anti-masker to pro-Trump to racist in a mere 47 seconds.

And of course it didn’t take long for folks to figure out her identity. But most people just wanted to roast her.

It often feels like there isn’t much else we can do, since these people clearly aren’t going to change their tune and listen to reason.

Quite a few people responded to the video with a variation on the question of why Trump voters have been so unflinchingly angry ever since he won the election in 2016.

Will losing in 2020 help them calm down? We probably owe it to them to find out.