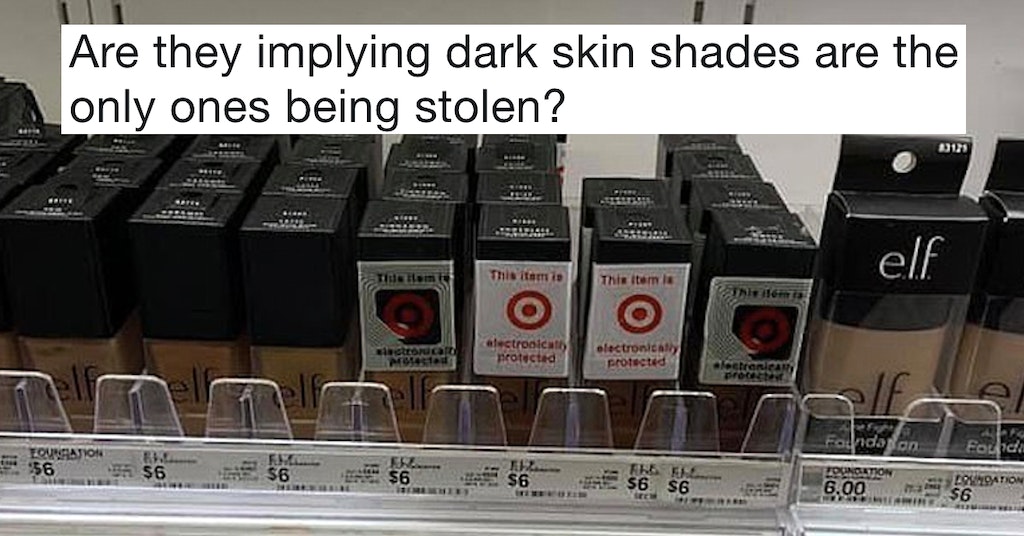 A tweet went so viral it drove the original poster to set their profile to private. The Daily Dot reports that the original tweet read, “Any reason you only put these anti theft devices on the darkest shades?” and tagged Target’s official account.

The tweet included a photo of the makeup section in Target holding a bunch of foundation shades. A few of them are labeled with anti-theft devices that read, “This item is electronically protected.”

As the poster pointed out, the label is only on the dark shades.

It’s hard to know if the original poster found this image, took it themselves or manipulated it to look like an obvious case of racist company policy. But given the state of affairs in this country, it seems entirely possible that this image is completely real.

Very unfortunately, there are a lot of people who disagree, which might be why the poster went private. Many of the replies are from white people stating baldly that dark shades get stolen more.

They are the ones getting stolen the most.

Well maybe it’s actually because that’s the shades that are being stolen?

But a lot of people in the replies jumped in to say that in their experience, white people or other races who are less monitored in the store are much more likely to steal. No one is watching them, so no one is busting them:

The sad things is heuristics tell you it’s blacks, but the reality is it’s normally white, senior citizens or white women with strollers. These two demos are the least monitored, but the most likely to steal. If you worked in retail, you know the truth

lol I worked at AE too and it was always white girls who stole our stuff ????

No cap. I watched Asian men and women steal belts, shoes and bags right up out the store. Slick af in broad daylight all because NO-ONE EXPECTED THEM TO BE A SHOPLIFTER

While I do not condone shoplifting, I know few white girls who made it through their teen years without trying it, probably because their privilege protected them from serious consequences if they were caught. Also, for the thrill.

Some people had some jokes about who would even want to steal cheap Elf makeup in the first place, in any shade, and Justin Trudeau was named as a potential culprit:

Sad part is that its yt people that are the reason why the darkest shades are always unavailable. They need the dark shades to contour themselves into someone else.