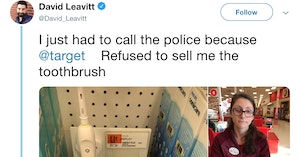 A man named David Leavitt is attracting attention on Twitter right now, probably because that’s his primary directive: everything he does is for attention. There are a lot of these types of guys on social media. All they care about is getting a lot of responses and traffic and followers, no matter how much they have to drag their slimy bellies in the dirt. Only, right now, poeple are actually talking about what Leavitt is doing and why.

It started when he posted a photo of a woman who worked at Target who he said refused to honor a pricing mistake labeling a toothbrush as being only a penny. Leavitt has over 200 thousand followers, so blasting this woman’s face to all of them was pretty offensive to people. Folks quickly responded that he should take these images down.

This @target manager Tori is not honoring the price of their items per massachusetts law pic.twitter.com/7IYMjCcutZ

He didn’t, of course. Instead, he escalated the situation, claiming he called the actual police. He clarified he called their non-emergency line, but still, no one was happy with Leavitt’s choice. He added that he was informed that he would have to file a lawsuit against Target and the unfortunate Tori, who just pulled the worst shift of her life. He also offered some sob story about not having been to a dentist in three years and desperately needing this $0.01 toothbrush before all his teeth fell out of his head, but someone screenshot a tweet of his referencing a dentist visit pretty recently, so…that’s a lie.

I did not call 911. I called the business number for the police and told them it was not an emergency and they could take their time and explained the situation.

Corporations like @target are not above the law. The police officer told me they’d testify that they saw the price and that the manager wouldn’t sell me the item for the price listed.

I have not been able to afford to go to a dentist in over three years. So yes I wanted a good toothbrush and was thrilled to see such an amazing prize on an @OralB but @target refused to honor it and now I have to take them to court

Pretty much no one is on Leavitt’s side, responding that he is the be A-hole in this situation, not Tori the manager:

They are the ones who put the price!

Target needs to be held accountable

It wouldn’t have been free, it would have been the advertised price. Why don’t you understand that?

So, you haven’t been able to afford to go to dentist for 3 years? How do you explain this tweet? Do you just harass random dental offices you’re not attending?

Plus it was a “display price”…do the decent thing (for her & you) and delete her photo & this entire thread. pic.twitter.com/Yi4uOdT8Pm

Even the Target Twitter account that deals with customer complaints seems pretty fed up with Leavitt in their response:

Eventually, journalist Yashar Ali shared a story in the replies about Leavitt, which outlined his tendency to court controversy, ad how he mocked Ariana Grande moments after her Manchester concert experienced a mass shooting. He also attacked Anthony Bourdain shortly after the famous chef died by suicide.

Basically, he’s a crappy dude who no one should feed with attention. Let’s stop doing it right now, okay?