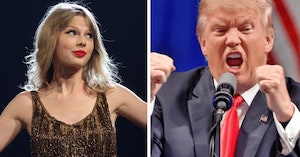 Singer Taylor Swift came out in full force against Donald Trump this morning following the president’s alarming tweets calling protesters against police brutality “thugs” and seeming to call for violence against them. Swift accused Trump of “stoking the fires of white supremacy and racism your entire presidency” and promised that the American public would “vote you out in November.”

After stoking the fires of white supremacy and racism your entire presidency, you have the nerve to feign moral superiority before threatening violence? ‘When the looting starts the shooting starts’??? We will vote you out in November. @realdonaldtrump

Thursday night, as protesters in Minneapolis continued to express their rage over the killing of George Floyd and decades upon decades of similar police brutality, Trump tweeted a tweet so outrageous that Twitter finally made use of their promise to hide his rule-breaking posts behind a warning.

“These THUGS are dishonoring the memory of George Floyd, and I won’t let that happen,” he wrote. “Just spoke to Governor Tim Walz and told him that the Military is with him all the way. Any difficulty and we will assume control but, when the looting starts, the shooting starts.”

….These THUGS are dishonoring the memory of George Floyd, and I won’t let that happen. Just spoke to Governor Tim Walz and told him that the Military is with him all the way. Any difficulty and we will assume control but, when the looting starts, the shooting starts. Thank you!

The last bit before the bizarre “thank you” has been widely condemned as a violent threat that will encourage both the National Guard and groups of dangerous white supremacists to shoot and kill protesters. A shooting in Louiseville during a protest for EMT Breonna Taylor, who was shot and killed by police in her bed while they were looking for someone already in custody, has already left several people injured, with one in critical condition.

Swift has gradually become more politically vocal over the past couple of years after being mostly silent on political and social issues for the majority of her career. Then, in 2018, she penned an Instagram post announcing her support for Democrat Phil Bredesen to represent her home state of Tenessee against Marsha Blackburn.

“I believe in the fight for LGBTQ rights, and that any form of discrimination based on sexual orientation or gender is WRONG,” she said. “I believe that the systemic racism we still see in this country towards people of color is terrifying, sickening and prevalent.”

Fans are fairly split on Swift’s latest political statement, with Trump supporters predictably upset at her expressing an opinion.

You’ve lost a lot of fans T S. Must be nice to live out of the normal every day struggles of the American people while you sit high and judge others. I’ve brought my girls to several of your concerts, never again.

The President did not threaten violence. You are falling for a Twitter fact check.

Also, Trump will win in November.

However, just as many people, if not more, are thrilled to see her call out the president.

THANK YOU FOR USING YOUR PLATFORM AND STANDING UP TAYLOR, it makes a difference!!!

I recorded an entire podcast about Taylor Swift’s silence re: Trump and white supremacy.
I’m so thrilled to see her speaking out today, setting a strong, clear example for the millions of white women and girls who look up to her. Thank you.

Keep it up, Taylor.