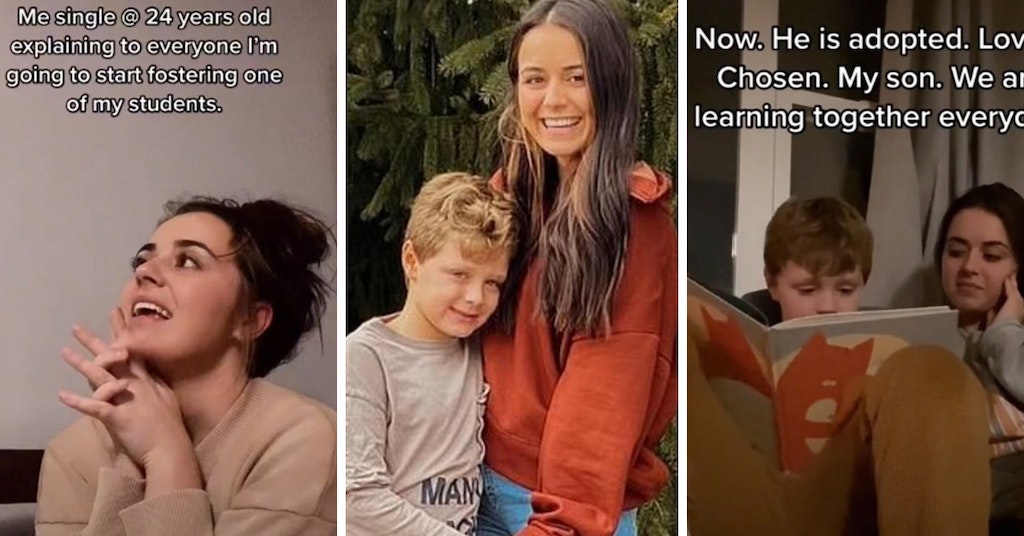 Young, Single Teacher Adopts Her Own Student To Save Him

Paige Bramlet, 25, from Indiana adopted her five-year-old student, William. She had met him when she worked as his behavioral specialist while he was in kindergarten; she was just 24 and he was 4 at the time.

Her friends and family warned her that she was “insane” for taking him in, but Paige insisted.

William had faced, as Paige puts it, “endless trauma” and he had PTSD at just four years old.

He bounced around from home to home during his young life; Paige decided to open up her home to him. Her friends thought it was “crazy” because she was so young and unmarried.

Paige fell in love with the young boy and officially adopted him a little over a year after she invited him into her home.

She shared her story in a TikTok video that quickly went viral. She sat reading a book about adoption with William in the clip. She said:

“He was my kindergarten student. I was his behavior specialist.”

“He was in foster care and struggled with behaviors from PTSD and trauma. He had been in several homes in four years.

“One day, he didn’t show up to school, and he had never missed a day. I ran into his caseworker collecting his things in the hallway.”

“She told me they were looking for a forever home for him to be placed in. I introduced myself and asked her what to do to become his forever home.

“Now, he is adopted, loved, and chosen. My son. We are learning together everyday.

Paige also uploaded another video sharing how she felt about the response from her peers when she decided to foster William.

‘Me, single at 24-years-old explaining to everyone that I’m going to start fostering one of my students,’ she captioned the video. In the background, Taylor Swift sang “Oh my god, she’s insane,” and Paige mouthed the lyrics.

Paige also shared a video reminding viewers that though “foster care is so hard” it is “worth it”. She showed clips of her and William skiing, dancing, rollerskating, and so on.

“Foster care is worth it. Can’t believe all of the memories and so many more to go,” she wrote in the caption.

Viewers were so moved by Paige’s good work. They flooded her comments with kind words:

“You are a really special person. He is so lucky to have you.”

“You are not insane at all. I keep telling my fiancé that if one of my students needed a home we would do this,” wrote a teacher.

“This makes my heart so happy. I was adopted at 15 by my momma. You gave him a chance to beat the odds and not just be a number.”

“I am a single adoptive mama to four siblings! It’s not easy but our kids deserve the best.”

Paige and William are elated to be spending their first Christmas together with their newly adopted puppy, Banks.