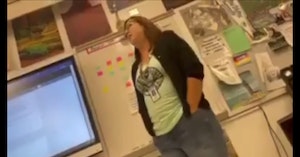 Teacher Fired For Bashing Trump, Anti-Vaxxers To Her Class In Viral Video

In what U.S. conservatives would very likely call a case of “cancel culture” if it had been one of their own who was fired for a right-wing rant, a Utah high school teacher was fired after she was recorded by a student bashing Donald Trump, anti-vaxxers, climate change deniers, and homophobes during class.

The teacher, Leah Kinyon, was reportedly spurred on by questions about gender identity and pronouns, resulting in a four-minute video of her saying a whole lot of things that some parents would likely take issue with, particularly the part where she says her students’ parents are all stupid.

While this is the kind of straight-talking that Trump supporters often cite as a top reason they voted for him, Kinyon was investigated by the Alpine School District after one of her students posted the video online and claimed that she often goes on similar rants, which made him feel “unsafe.” Remember when conservatives were all up in arms against what they called the supposed liberal need for “safe spaces”? Anyway.

Kinyon is particularly irritated about the topic of vaccines, expressing that she would be proud of her students if they got vaccinated and also expressing that she’s not happy to have students who refuse it putting her and her family at risk of catching highly contagious variants of the virus.

“I don’t have to be happy about the fact that there’s kids coming in here with their variants that could possible get me or my family sick,” she says. “That’s rude. And I’m not going to pretend like it’s not so don’t ask me to.”

Utah County, where Kinyon used to work, has a vaccination rate on the low end, reaching just below 41 percent. Meanwhile, COVID-19 cases in the county are spiking as they are in most of the country, especially those with low vaccination rates, but kids and teachers alike are being forced back into physical classrooms anyway.

In between statements on anti-vaxxers, she makes her feelings about Donald Trump perfectly clear.

“I hate Donald Trump. I’m going to say it. I don’t care what y’all think. Trump sucks,” she continues, with a special emphasis on the word “sucks.”

“He is a sexual predator. He’s a literal moron.”

What may have riled up parents the most, however, was when Kinyon went after them in particular. Within the county, 66 percent of voters in the 2020 presidential election voted for Donald Trump, and Kinyon made it clear that she has a low opinion of the majority of the adults who are raising the kids in her class.

“Most of y’all’s parents are dumber than you. I’m going to say that out loud. My parents are freaking dumb,” she said. Then she gave some advice that many parents do not want anybody to give their kids, no matter how true it might be. “You don’t have to do everything your parents say and you don’t have to believe everything your parents believe because most likely you’re smarter than them.”

Other likely reasons she’s no longer working at this school include her calling one of her students “pathetic” and “the problem with the world” for not believing in climate change, and probably the swearing that happened while she was making it clear that homophobia would not be tolerated in her classroom.

Although the Alpine School District only said that Kinyon is not working for them anymore and didn’t explicitly state that she was fired, their statement calling her speech “inappropriate” has most people assuming that she was fired.

“We became aware late this afternoon of an incident that took place today in one of our high school classrooms,” said the initial statement from the school board. “An immediate investigation ensued. The employee has been put on administrative leave pending a thorough investigation. This behavior is inappropriate, not reflective of the professional conduct and decorum we expect of our teachers, and will not be tolerated.”

They later announced that “the teacher involved is no longer an employee of Alpine School District.”

Utah conservatives who probably defended Trump for every offensive thing he ever said as president of the entire country are now celebrating, being as immune to hypocrisy and irony as we all with they were to COVID-19.

Others are claiming that this single example of a teacher speaking her mind on real issues is evidence of that totally super real left-wing plot to indoctrinate children straight into the Democratic party via public education. Even former Trump assistant with possible ties to a Hungarian Nazi organization Sebastian Gorka is getting in on the panic.