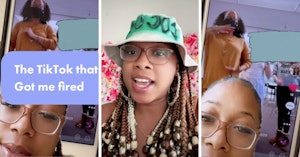 Social media has opened so many new opportunities for people to get fired based on what ends up online, even if it’s something relatively harmless. And a teacher is opening up to TikTok about her own unexpected experience with that.

Jania Ashay (@heyniaa_) explained that, about a year ago, she was fired from her job teaching sixth grade ESL (English as a second language) classes after a couple of her students asked her to do a TikTok dance with them during their lunch hour.

“Two of the [students] asked me if they could come in my class one day and eat lunch,” she said. “I’m a cool teacher, so of course I’m gonna say yes. And while they’re in there, they ask me if we can do a little Tiky Tok, or whatever. Mistake number one, they weren’t supposed to have their phones out at lunch, but we was just chilling.”

Ashay says it was a “simple little dance” to a version of a Nicki Minaj song edited to be more appropriate for children. “I’m a dancer, I wasn’t shaking nothing, it was so PG,” she added.

By the next day, both students had been called into the principal’s office and told to take down the video, and were also allegedly told not to let Ashay know what was going on.

“She wanted me to come in blindsided,” she said of the principal.

The students told her anyway, but being prepared didn’t stop the principal from firing her all the same. She was able to finish out the school year, but that was that.

People weren’t sure what the actual problem here was — engaging with students? Making a connection with them? Doing her job?

“So it’s a problem to participate in a tiktok now?” asked @chellymellow. “my highschool was a creative arts. ik these kids upset.”

“It’s crazy cus you can go anywhere and teachers do these exact same things and get applause for it,” @lovely.lenee added.

“You made a difference in those kids lives. Some people just hate we existing. One of my funniest TikToks was made at work in the front office,” shared @masterpieces762.

Ashay says the experience was traumatizing and she still hasn’t fully gotten over it, but that she’s ultimately in a better place now.

“I would do it all over again if I could end up where I am today,” she said.