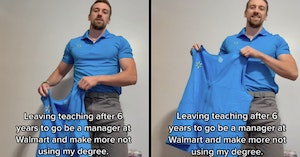 A teacher’s TikTok about quitting his job after being offered more money to work at Walmart has gone viral as it becomes the latest example of how the United States continually fails when it comes to education.

Seth Goshorn had been working in education for six years, but ultimately decided to quit and “make more not using my degree,” as he wrote on TikTok, where he shared a short video of him showing off his new Walmart vest.

After the video went viral, Goshorn spoke further with Good Morning America about his decision, which was partly fueled by the desire to save up money and eventually start a family with his fiancée.

The former second grade teacher revealed he was making around $43,000 a year working for an Ohio public school, whereas at Walmart, as a stocking 2 coach, he is slated to bring home $55,000 per year plus bonuses.

Goshorn’s decision to leave a career he loved, especially after spending time and money to pursue the education necessary to enter the teaching field, is part of an ongoing problem in the United States. Many teachers just aren’t being paid a living wage, and find themselves struggling to work additional jobs during the summer and even on weekends and weeknights, all while still spending hours outside of the classroom prepping lessons, grading assignments, and more.

He noted in the comments of his video that he “loved teaching” and was saddened by financially having to make this choice.