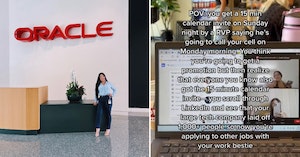 Tech Company Lays Off Over 1,000 Workers Via Mass Meeting, One Finds Out From LinkedIn

The multinational computer technology company Oracle is going through some things right now, at least according to a TikTok video revealing that they laid off over 1,000 employees, and apparently via some kind of mass nightmare Zoom meeting. TikTok user Kimberly Foo says she realized something was off when she noticed that hundreds of her fellow employees were invited to the same virtual meeting she was, and then logged into LinkedIn to discover the news of the massive layoffs.

“POV: you get a 15 min calendar invite on Sunday night by a RVP saying he’s going to call your cell on Monday morning, You think you’re going to get a promotion but then realize that everyone you know also got the 15 minute calendar invite,” the video overlay text reads. “You scroll through LinkedIn and see that your large tech company laid off 1,000+ people so now you’re applying to other jobs with your work bestie.”

Foo remarks that she’s “still smiling,” but it’s never fun news to find out that you’ve lost your job because your company is not doing well. This happens frequently in the tech industry, which is vulnerable to changes in the market, high pressure competition, and various trends.

With recession fears growing in the U.S., reports of layoffs at such companies are growing, and others are threatening or posting pedantic LinkedIn rants and crying about having to mass-fire their employees while they continue to enjoy record profits. Under capitalism, regardless of other reasons offered by tearful CEOs, layoffs are an easy and guaranteed way to temporarily boost overall profits, making the capitalists look good so they can give themselves bonuses and jump with their golden parachutes when everything crumbles.

Just a week ago, journalist Jordan Parker Erb described the situation at Oracle in particular as “complete chaos” after they issued the layoffs and began “restructuring.” Most of the time this means that they’ll be mass hiring new workers with a lower rate of pay and worse benefits than they were giving the workers they just fired.

According to Erb, the Oracle layoffs devastated some of their departments, with reductions as high as 50 percent.

“The Advertising and Customer Experience team was said to have been cut, too,” she wrote. “‘The common verb to describe ACX is that they were obliterated,’ one employee said.”

One of the world’s largest tech companies, Google, is also in the news today for extending its hiring freeze and threatening “blood in the streets” if sales figures don’t improve.

“In a screenshot viewed by Insider, Google Cloud sales leadership threatened employees, saying there will be an ‘overall examination of sales productivity and productivity in general’ and that if next quarter results ‘don’t look up, there will be blood on the streets,'” Erb reports.

Foo herself was with Oracle for over a year before she was laid off, according to her LinkedIn profile. She and her many former coworkers are now seeking new work, but will hopefully have their spirits boosted by the supportive comments both on LinkedIn and TikTok, where people are feeling Foo’s pain.

“Exact thing happened to me back in April,” commented one TikToker.

“Happened to me in May,” said another. “Be sure to start a Google form where those who want can add their details and the spreadsheet can be shared with recruiters.”