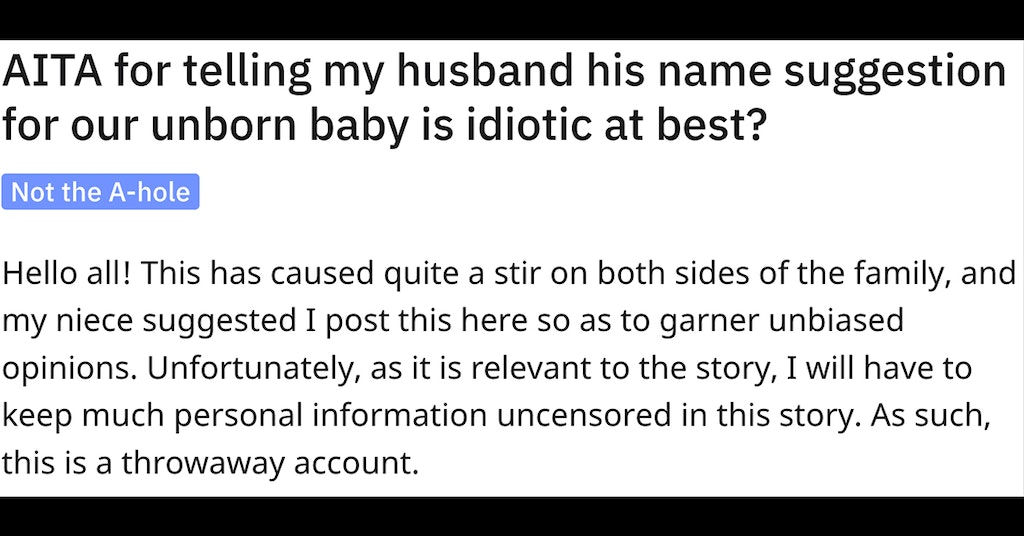 Naming a child is an important moment for parents. Although it’s ultimately up to the kid what kind of person they grow up to be, a name can go a long way when it comes to first impressions, or how they’re treated by fellow youngsters growing up.

One frustrated mother-to-be had a hard time getting that concept through to her husband, so she turned to reddit’s Am I The A—hole forum to see which one of them was being unreasonable as they prep for the arrival of their first child.

The poster explained that, in the midst of her pregnancy, her husband’s grandfather passed away. The two were very close, and in his grief, her husband insisted he wanted to name their child after the great-grandfather they would never meet — either Theodore or Theodora, depending on gender, with the intent to call them either Teddy/Theo or Thea.

“It’s not that I mind the name, the issue is that our last name is Bounde; pronounced bun-dee,” she wrote.

“I asked my husband, do you really see no issue in naming our kid Teddy Bounde? You don’t think that would raise any questions?” she continued. “He says no, he’s just honoring his grandpa; I told him he needs to think about how we will be perceived, how our child will be treated, and the implications that that name inherently carries.”

The debate split the family, prompting the turn to reddit, where there was a lot less debate about who was in the wrong.

Fortunately, an update to the story revealed that the parents-to-be worked out the argument on their own.

They ultimately settled on utilizing the grandfather’s middle name, Silas, for their child, and decided to spend some time in both grief and marriage counseling to be safe.